Interview by Karlos Zurutuza
A former MP during Najibullah´s rule and president of the Afghan Trade Unions of Afghanistan for more than ten years afterwards, Mr. Purdely is today one of the main advocates for the Baluch’s language and culture in Afghanistan, a work he conducts from his position at the Centre for Regional Studies of Afghanistan. 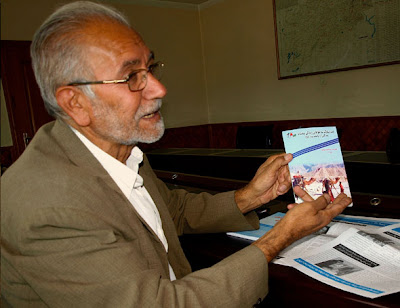 Abdul Sattar Purdley, what is the security situation for the Baluch in Nimroz and Helmand provinces?
Helmand is far from being under Kabul´s control and the local population, whether they are Baluch, Pashtun or Tajik, are suffering the most direct consequences of this war. The situation in Nimroz is a bit better. Zaranj, the provincial capital, is under the control of Kabul but NATO is not present except for a small military presence in Delaram district, on the opposite side of the borders with West and East Baluchistan. Neither is there a PRT (Provincial Reconstruction Team). The Taliban are in control of Delaram, Khashrod and the border area with Pakistan. Travelling by road is still very dangerous in Nimroz and the Baluch are an easy target for the Taliban there.
Does the tribal system apply to North Baluchistan?
The tribal system is alive in Nimroz and Helmand, being the main tribes the Rakhshani, the Narui and the Brahui. Ours is a very backward region in Afghanistan that lives on agriculture but has serious water problems because Iran is controlling the water traffic.
Switching to cultural issues, when did the Baluch’s language and culture start to get support in Afghanistan?
Daud´s dictatorship (1973-78) witnessed the first radio programs in Baluchi. Two months after his fall, a TV channel in our language was set in Nimroz (North Baluchistan). Under the control of the Russians, we had six hours of radio in Baluchi for the entire country and fully in Baluchi in Nimroz. It was also then when we printed the first newspapers and books in our language. According to the census conducted at that time by the Soviets conducted, the Baluch in Nimroz comprise over a 64% of the population.
What happened during the Taliban regime?
After the fall of the Communist Government there was a sharp cultural decline in the country. Those years marked a blow not only to Baluch’s culture, but for culture as a whole. The repression was brutal against us because, among other things, we are moderate Muslims, far away from the Salafist ideology. I myself was taken prisoner by the Taliban so I took refuge in Western Baluchistan and did not come back until 2002.
Have things improved for the Afghan Baluch since then?
We had to start from the very ashes so it was not difficult. When I came back we set up Nimroz Carawan (Organization for Baluch’s culture and language) and we’ve been working from this platform ever since. Today, however, we only have a 5% quota for Baluchi in Nimroz and no more than half an hour a day. Accordingly, the former department for the Baluchi language at the Academy of Sciences of Afghanistan has been removed. On a positive note, the Government started publishing Baluchi language school books for the children in Nimroz and the Baluch villages in Helmand two years ago. I myself have written the 7th, 8th and 9th grade ones.
What is the current situation of the Baluchi language in Afghanistan?
We estimate there are between one million and a half and two million Baluch in Afghanistan but not all of them speak Baluchi. Those in Kandahar, Wardak, Uruzgan and Balkh provinces speak Pashtun while the Baluch in Kunduz, Badakhshan, Takhar and Dai Kundi speak Dari (local variant of Persian). Today only those in the provinces of Helmand and Nimroz speak Baluchi.
Are you in touch with the Baluch from West and East Baluchistan?
Our contacts are mainly at an individual level but because our families are divided by those artificial borders but we do share our TV and radio programs in Baluchi with our people in the east. When we organized our seminar on Baluch’s language and Culture at the Centre for Regional Studies in Afghanistan, we had Mir Ghaus Bakhsh Bezanjo’s son as a guest speaker. We also have a fluent communication with Attaullah Mengal.
Did you ever meet the Marris during their exile in Afghanistan?
Of course! I met Khair Bakhsh Marri and his family 1981 for the first time. He was in Helmand and I was in Kabul, we used to gather at the weekends. The Marris and the Bugtis have always suffered a terrible pogrom in the east so a lot of them came here.
How do you foresee the future of your people in Afghanistan?
Since the division of our territory three we have faced terrible episodes of repression by the hegemonic groups in the region: the Persians in Iran, the Punjabis in Pakistan and the Taliban here, in Afghanistan. Northern Baluch have always had good relations with the rest of the nations in the country, especially the Hazaras. The wife of one of the main Hazara leader is Baluch herself. We are small nation inside Afghanistan but we have demonstrated that we can live together with Pashtuns, Hazaras, Tajik and Uzbek neighbours.
Karlos Zurutuza is a freelance journalist covering off-the-radar conflict regions in the Caucasus and Central Asia. He was awarded the Nawab Bugti Reporting Award 2009 for his reporting on the Baluch areas in Afghanistan, Pakistan and Iran.
Source: Crisis Baluchistan
Posted by Sarbaaz Baloch at 17:40