The Baloch Iron lady: tells the suffering of Baloch families of abducted Baloch 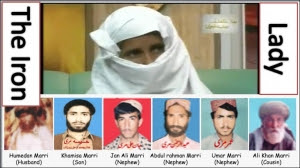 Imagine you are forced to live your all life alone without any relative in your life, forcedly taken, beaten & killed & you didnt got the chance to see their faces for the last time. The very thought of living alone makes you shiver because it is hardly impossible for a human to even live a second without anybody giving you a back support.

Now lets put a woman in this example when her husband was dragged, beaten, manhandled & later bristled with bullets infront of her and the children, she suffered the most horrific sight but didn’t flinched because of her children, when the assailant were done they slapped her & ordered her not to drag any judicial inquiries in this or she will face the dire consequences. She didn’t reacted nor did she went for the police neither she went for judicial inquiries hoping that the worst was over, but she was wrong.

The story I am writing is not a fairy tale nor did it happen in ‘Palestine’, ‘Kashmir’, ‘Bahrain’ or ‘Syria’ it happened right here in ‘Balochistan’ the wretched land under Pakistan’s oppression. The woman I am talking about is Mahir Bibi Marri (The Iron Lady) who suffered the trauma but didn’t suffer it once but dozens of time, her heart aches but she doesn’t give up, it’s like she gets beaten up everytime but doesn’t want to stay down, just like the Pakistani Intelligence services would say “She wont give up”.

Her Husband Mir Humedan Marri was killed by Pakistan Army when they raided her house dragged, assaulted & later put dozens of bullets in his body. The day she saw her husband murdered is still fresh in her mind when she was interviewed on National Media, it was like she was referring to yesterday, she remembered how Pakistan army threw her from here to there without respecting her as a woman and she remembers how this same army who call themselves “Pure Army” kicked her children while they resisted their father’s arrest.

The day 9th September 1985 to her is the day when she saw the horror of this vicious army as they took shots after shots at her husband like he was a piñata or an animal ready to be slaughtered, “Nothing can be described but pure hatred & evil, as they killed my husband, my son & now I don’t know where my nephews are” Says Mahir Bibi Marri.

Truly hatred and evil is the word to describe them, the way they have killed and dumped Baloch political activists is not human nature. Mahir Bibi Marri with tear in her eyes haven’t seen her son for 6 years, Mr Kamesa Marri who she says was her last support and perhaps her last hope to love this life has not returned after 25 August 2006, The day when Pakistan army started bombarding Dera Bugti & Kohlu area. Mahir Bibi Marri says that she doesn’t believe her son is dead but he’s rather missing & abducted by Pakistan army, but it doesn’t looks like that what she believes is true because on that day 20 Baloch locals were killed and their bodies were not recovered, According to Baloch sources they were buried in a mass grave to hide the shame of Pakistan army.

She suffered more than any human being could suffer in one lifetime but the sad part is this that her suffering didn’t stopped on her son but continued her three nephews & a cousin for whom she went on a hunger strike in Karachi press club have been abducted by ISI (Inter Service Intelligence).

On 1st June 2008 her nephews Mr. Abdul Rehman Marri Age 36, Mr. Umar Marri Age 25 and Mr. Jan Ali Marri Age 20, were traveling from Jalarhi to Quetta but when they reached Balbali Checkpost near Harnai Quetta they were stopped by Pakistani Armed Forces and were arrested, Her cousin who is a 70 year old blacksmith from Quetta was abducted from Chaman by Pakistan forces, after the arrest the family of the missing persons have not received any information regarding them, not even the local police wanted to cooperate.

Mahir Bibi Marri (The Iron Lady) lost her husband, her son & her relatives but she still is fighting, hoping that somehow, someway, someone will wake up to these injustices and would provide her the justice for which she sits in a hunger strike but for sure the justice will not come from Pakistan judicial courts. Lastly Mahir Bibi Marri in her interview concluded “Whatever happened to my husband, my son & my nephews I am still going to protest because it is not about my family but the family of the thousands of Baloch who lost their loved ones in the hands of Pakistan army, I would like to plead to those International Powers to investigate and bring justice to the suffering Baloch families rather than turning a blind eye & a silence as a response”.

“Bring Justice, Bring Peace, The motives are different but we are humans after all and we can get along peacefully.” Diagoh Murad.
Posted by Sarbaaz Baloch at 04:45