HRCP for the freedom of expression in Balochistan 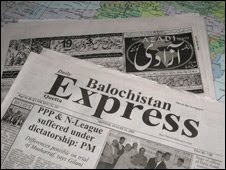 HE Human Rights Commission of Pakistan (HRCP) on Friday urged the government to respect press freedom in Balochistan.

A statement issued by the HRCP said: “The Commission is alarmed at reports of Frontier Constabulary (FC) personnel laying siege to Quetta offices of at least two newspapers. On August 18, Urdu daily Asaap announced suspension of its publication after security forces cordoned of its Quetta office for two weeks and all visitors and employees were frisked, questioned and humiliated.

FC personnel have now been deployed outside the offices of Urdu daily Aazdi and nobody is allowed in without submitting to a search and questioning.

Journalists in Balochistan face numerous security threats and this makes their work even harder.

Even prior to security forces’ clampdown, these newspapers were being victimised and Asaap - one of the widely-circulated Urdu newspaper in Balochistan - had been denied government advertisements for a number of years.