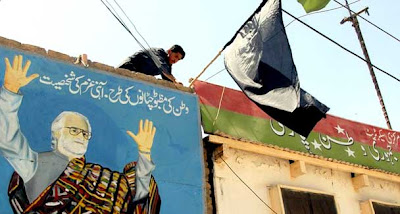 QUETTA: A shutter down and wheel jam strike is being observed in many parts of Balochistan on the third death anniversary of late Baloch politician Nawab Abkar Khan Bugti. The call for the strike had been given by Baloch nationalist parties.

Sources say the strike is being observed in Quetta, Mastung, Kalat, Khuzdar, Awaran, Kharan, Panjgur, Turbat, Gwadar, Sibi, Sui and many other towns and cities of the province. All the main shopping malls, markets and trading centres are closed in these cities and towns while traffic is also nominal.

Baloch nationalist parties are also observing the day as black day. They have hoisted black flags at their offices and houses to condemn the killing of Nawab Akbar Bugti.

Security has been beefed up on this occasion across the province to avert any untoward incident. In the provincial capital about 5000 officials of police, Balochistan Constabulary and Anti Terrorist Force besides a large number of Frontier Corps personnel have been deployed.

Quetta and other parts of the province also witnessed several incidents of violence on Tuesday evening in connection with Nawab Bugti’s death in which at least two persons were killed and over a dozen were wounded. —DawnNews