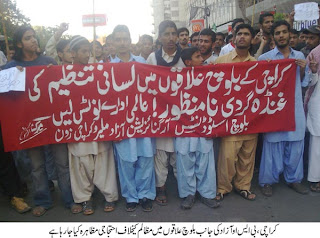 Karachi: BSO (azaad) and the Baloch residents of different villages including Malir, Hasan Lashkari, Purana Glimar, Peer Coloni and Siddique village in Karachi have protested in front of Karachi press club against the arrest and indiscriminate torture of four Baloch students by a ‘Karachi based ethnic group MQM). The protesters were holding placard and chanting slogans against the ethnic group.

Addressing the crowd and media men the BSO (A) leaders alleged that Karachi police was also siding with the MQM. They said recently the police have shot dead a young Baloch man 'Arif Baloch' in Karachi. Before the murder of Arif Baloch, Saood Baloch and Aziz Baloch were also murdered by the Rangers (local police) in Karach. Aziz Baloch whose mental condition was not stable has been picked by the police and few days later his tortured dead body was handed to his relatives. Baloch people strongly protested against his cold-blooded murder but no action was taken. Despite all these protests from Baloch people the MQM is still continuing its indiscriminate firings on Baloch villages and it is suspected that they have the full support of the local police.

Nisar Baloch an anti encroachment social worker who had challenged the illegal occupation of Gutter Baghicha (in Old Golimar area) by the MQM land mafia group has finally paid the ultimate price for opposing these crooks and criminals. The same ethnic fascist group have targeted Hussein Baloch a resident of Hassan Lashkari village in Karachi. Hussein Baloch though survived but sustained serious injuries. 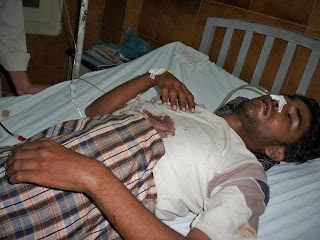 Photo of injured Junaid Baloch On 19/12/2009 five Baloch youth namely Junaid Baloch, Shahnawaz Baloch, Riyaz Baloch, Najeeb Baloch and Rafeeq Baloch have been stopped by armed members of MQM, severely beaten on the spot and later taken away to an undisclosed location where Junaid Baloch has been. Mr Junaid Baloch is now admitted in a hospital in Karachi where he is fighting for his life.

The protesters urged the leadership of MQM to stop targeting Baloch youth and firing on Baloch villages. “If the target killing of Baloch youth and firing on Baloch villages continues by the armed groups of MQM then the safety of Urdu speaking people all over Balochistan cannot be guaranteed. That is why would be a wise decision by this ethnic group and their leadership to immediately stop the bloodshed of Baloch people in Karachi. ” the protesters warned.
Posted by Sarbaaz Baloch at 13:47