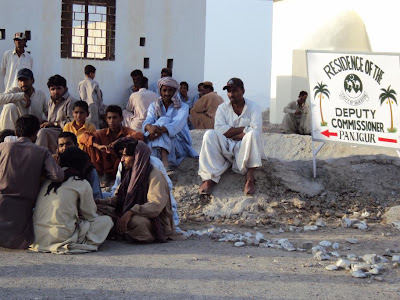 The political and security situation in Panjgur, a district located on the Iranian border, has turned very hostile and tense after the Frontier Corps (FC) shot dead Hussain Baloch, a young political activist belonging to Katagri area. Hussain was among hundreds of male and female protestors who demonstrated against the recent arrest of three Baloch leaders Dr. Abid Shah, Safeer Baloch and Abdul Sattar Paromi.

In the first place, four FC vans entered in the vicinity of District Headquarter Hospital Panjgur and whisked away three political workers who were sitting at a medical store. All three activists were blindfolded and taken away to an unknown location by their official captors.

This particular instance of whisking away the Baloch activists was very similar to the one recorded in Turbat last year when three Baloch leaders – Ghulam Mohammad Baloch, Lala Munir Baloch and Sher Mohammad Baloch – were whisked away by the FC men. A few days later, the dead bodies of missing Baloch leaders were found in the outskirts of Turbat.

Everyone blamed FC for these killings but no action was ever taken by the elements responsible. Even the belligerent Inspector General of the FC, Major General Saleem Nawaz, continues to serve on his position at a time when no one in Balochistan likes to see him any longer. He is a man who, unfortunately, cheers torture, disappearance, violence and bloodshed.

A desperate reaction by the family members and supporters of the three Baloch leaders is understandable in the wake of recent developments where the dead bodies of the missing Baloch persons are being reproduced on almost daily basis.

Both male and female protestors in Panjgur besieged the office of the Deputy Commissioner against what they bill as the “kidnapping” of the Baloch political workers. On his part, the DC has reportedly handed over the entire district to the Frontier Corps (FC) owing to his administration’s inability to grapple with the sudden outburst of violence in the border town. Panjgur in the control of FC is like a bull in a China shop.

The three arrested Baloch political workers should be released immediately without causing more unrest and violence in a district which has a longstanding history of FC brutality against its citizens.

While the political government, both in the Center and the province, has lost their control over the FC, one would expect the judiciary to take suo moto notice of the extra-constitutional use of power by the FC. All FC camps should be removed from the city centers and relocated on the border with Iran in order to provide the masses some breathing space and a sense of security.