A grim conspiracy against Baloch and Balochistan 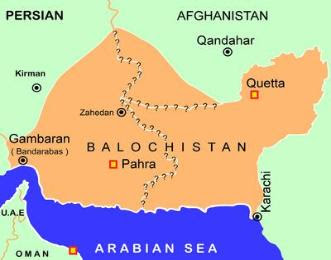 According to the news reached, Tehran with the country's Zaboli ministers have formed a Mafia gang and the aim of which is to divide the province of Balochistan ( Iranian Occupied ) in two. This Zaboli Mafia is supported by the main powers of the country as someone named Khamenei is backing them.

The fascist Zabolis are not implementing this conspiracy only to divide Baluch and Baluchistan but are also after  removing the historical name of Baluchistan from the map. It should be noted that when the Shah of Iran occupied Baluchistan, some large historical parts of Baluchistan were forcefully isolated and were given to the Iranian provinces of Kerman, Khorasan and Hormozgan.

The reason of this new plan could well be the uprising of the Baluch Freedom Movement in the Eastern Baluchistan ( Pakistani occupied ), Tehran is threatened of the awareness amongst  Baloch youth and the successful struggle of Sarmachars, that is why they are trying to save as much as they can by dividing the Baloch Land and creating confusions about the territorial claims.

Yes it is right that Zabolis are migrating to Baluchistan from different provinces of Iran since 76 years and the hospitable Baloch people have sought them refuge in Baluchistan, but this cant be a reason for them to betray and kill Baluch people that they are so desperate to torture and kill the Baluch youth with the guidance of Iranian army.

Baluchistan has a ancient history. Alexander couldn't overcome the Baloch neither the Mongol did, the proud history of Baluchistan itself talks about the defeats of all the occupiers by the Balochs, this includes Safavi's and Britishers also. It is a shame that these Fars and Zabolis never learn from the history of Baluchistan, it is that they too have to leave one day as others did, what remains is Baloch and Baluchistan.

This is the time for the Baloch to stand united against the enemy and save Baluchistan of more division, it is a matter of now or never.