Second attack on Balochs students in Punjab within a week 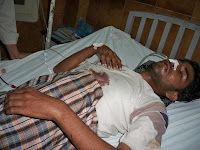 Punjab (Bhawalpur): Baloch students were assaulted by a group of Punjabi students in Bahawalpur, resulting in severe injuries to Shabir Baloch, Raza Ali Marri and Shahab Baloch. The Baloch students are members of BSO [Azaad]. Several members of BSO [A] have been victims of the series of attacks on Baloch students in Punjab. BSO [A] is a Baloch Student Organisation that advocates the Independence of the occupied state of Balochistan, which has been occupied by Pakistan and Iran; therefore the supporters of occupation have been attacking Baloch students wherever they find an opportunity to do so, with an objective to create fear amongst the people who advocate Balochistan’s Independence.

When the injured students were taken to a local hospital the doctors refused to treat the severely injured students and told the students that they won’t treat any Baloch patient, as the Balochs are struggling for the Independence of Balochistan. This act of the Pakistani doctors sheds light on the common thinking patterns of occupying people who do not respect any profession or human rights. Peace loving world can understand the behaviour and hatred of Pakistan army against Balochs by seeing this example of Pakistani Doctors.

Baloch Student Organization Azaad on this incident appeals all the students who are studying out of their countries to raise their voices against the incidents, to safeguard the lives of Baloch students who have left their country to acquire knowledge but are being refused medical treatment after being severely injured.
Posted by Sarbaaz Baloch at 13:45