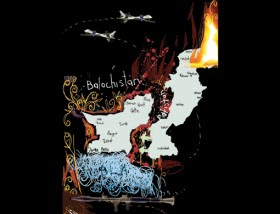 Quetta: Central spokesman of BRP Mr. Sher Mohammad Bugti has strongly condemned the killing of innocent women and children in Dera Bugti, by Pakistan army bombardment. He appealed to the United Nations and other International Human Rights Organisations to take notice of the Human Rights violations in Balochistan.

He said that the government’s announcements [packages] and reconciliations were nothing but drama and empty slogans. The ruling class is committing genocide of Baloch people even today [in this so called democratic period]. He said the government force have been carrying out barbaric acts in Sui, Sori, Azmerdan, Khajori and surroundings areas from last four days. “These peoples’ only fault is being Baloch and Bugti” said Sher Mohammad Bugti. Also in Neelagh region the Pakistani security forces have killed four persons including women. On the other hand seven innocent people including women and children have been killed close to Punjab’s bordering area of Nithal, these families were moving to safer places, where they wanted to work hard to help their children. But Pakistani brutal forces even did not spare them [refugees].

In Pathfeedar RD 238’s Goth Wali in Kandhkot Goth Zaheera, Shahnawaz, Baband and Dwanbah the bordering areas to Sindh have been bombarded, where poor people were busy working, their huts, standing corps and other belongings have been destroyed. Sher Mohammad Bugti has said that gunship helicopters and fighter jets have been used in above mentioned areas. He said the bombing was still continuing till the filing of this report, 15 persons including women and children have been injured so far. Hundreds of people have been arrested and taken to undisclosed locations for investigations. The water supply lines from Pathfeedar to surrounding farms have been cut off and people are being forced to leave the area. However when people move from their villages the Pakistani security forces will follow them and either arrest them or kill them. The injured people are not allowed to go to any hospitals, neither have they been provided any medicines.

Mr Bugti said that he was shocked that so called International Human Rights champions were silent over the death and destruction of innocent people in Balochistan. He said if the Pakistani brutal forces think that they will eliminate the Baloch struggle for liberation by such barbaric acts then they are entirely mistaken. Our nation’s determination will become stronger and the hatred against the state will grow even stronger.

Another spokesman of BRP Mr Faisal Bugti has also strongly condemned the attack on civilian populations and the killing of innocent people. He has also requested from the International community to press Pakistani army to halt the army operation. “The International Human Rights Bodies must take notice of ongoing Human Rights violations in Balochistan”. He said.