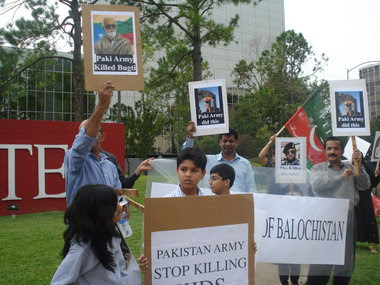 Houston:The first-ever Baluch protest in Houston on Saturday morning caught the attention of the local media as the protesters carried playcards of the burning Twin Towers after the 911 attacks that read, "Paki Army did this." 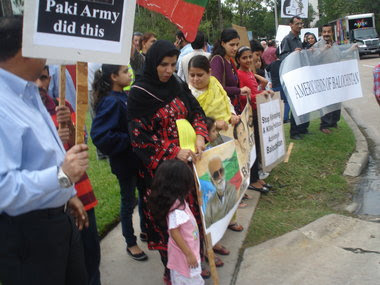 The successful protest against former coup plotter and dictator General Pervez Musharraf was organized by Malik Baloch and Rashid Baloch of the DC-based American Friends of Baluchistan, an organization dedicated to the independence of Baluchistan from Pakistan and Iran's neocolonial yoke, .
Musharraf was invited to speak at a luncheon at the Omni Hotel by the pro-dictatorship World Affairs Council of Houston.
The local public telvision Channel 13 in Houston interveiwed the A.F.B. leaders who said the reason they say Pakistan was involved in the 911 terror attacks was that 80 percent of Taliban an al Qaeda leaders are still in Pakistan. They added at the time of the 911 attacks the I.S.I. was running the Afghan government and Pakistan army was calling Afghanistan a fifth province of Pakistan.
"Pakistan is till providing sanctuary to Taliban and al qaeda," the two American-Baluch activists said.
Malik Baloch and Rashid Baloch blasted Musharraf and Pakistan army for committing brutalities and crimes against humanity in Occupied Baluchistan and Sind province.
"We also like to record our protest to the present U.S. administration and US think-tanks for according dictator Musharaf VIP status, and inviting him to speak in the U.S. in intellectual forums," the two A.F.B presiding council members said. "We have the right to question the legitimacy of these think-tanks for inviting a fugitive dictator, whose hands are still soaked with the blood of veteran politician, Akbar khan Bugti, Balach Marri and numerous other innocent political activists, who dared to raise their voice against the Pakistan military injustices in Balochistan."
The accused Pakistan army and spy agencies still carrying out Musharaf's legacy of kidnapping and extra-judicial killing of secular Baluch political activists. 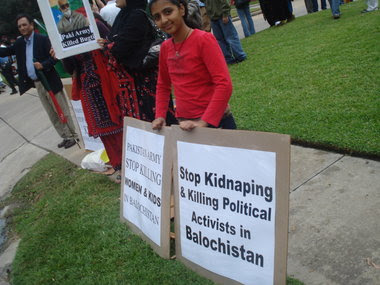 "The Baluch would never forget this dirty dictator for his cold blooded murder of two times governor and chief Minister of Baluchistan, Akbar khan Bugti and Bala'ach Mari with the help of U.S. supplied sophisticated Cobra gunship helicopters," the two A.F.B. leaders deplored. "The American Friends of Baluchistan is determine to expose the crimes of Musharaf and notorious Pakistani spy agency called ISI before the American public and the civilized world. We expect the fellow Americans to raise their voice and protest against the State Department and so-called think-tanks for according this brutal dictator and coup leader V.I.P. status in the U.S."
The two A.F.B. actisvists recalled during his dictatorial regime, hundreds of political activists, including women and children were disappeared, some of who are still languishing in the army and torture cells in different military cantonments in Pakistan.
During his regime the notorious ISI also targeted the twice prime minister Benazir Bhutto and put the blame on Taliban, they said, adding Musharaf is still being protected by the Pakistani rogue and jihadi army.
They cautioned the U.S. administration Pakistan Army would never be an effective partner in war against the Al-qaida and Taliban terrorists. "Supplying sophisticated military equipment to Pakistan army would be a futile venture on the part of U.S. administration to fight war against al Qaida and Taliban.
"American supplied arms to Pakistan army are being used to crush the secular Baluch people who are struggling to regain their occupied land, Balochistan, which was forcefully annexed with Pakistan in 1948," th two activists said.
They called upon the U.S. administration to understand the fact that the Talibans are the brain-child of the I.S.I., who groomed these terrorists and used them as proxy in Afghanistan. "The Pakistani army is playing double games with the U.S. and still protecting the most powerful factions of Mullah Omar and Haqqani Talibans in Pakistan. Mullah Omar and Haqqani groups are provided safe haven under the protection of military intelligence agencies in Quetta, Baluchistan, and Peshawar to use them as proxy to counter the influence of India in Afghanistan and to destabilize the Afghan government.
"Secondly, Talibans are considered the strategic assets of Pakistan army to use them as a bargaining chip to secure financial and military assistance from the US."
The A.F.B. said it was not opposed to US socio-economic aid to Pakistan with adequate vigilance to ensure the economic assistance is utilized properly for the welfare of downtrodden masses and improve the infrastructure and quality of education.
"However, providing military aid inthe form of sophisticated weaponries and modern technologies to Pakistan military, would be utterly dangerous for the U.S. and the minority Baluchs and Sindhi people. There are ample evidence of misuse of American military weaponries by Pakistan army in the past, where Pakistan army used the U.S .-supplied weapons against the secular Baluch, but spared the Taliban and al Qaida."
They said Musharraf has been summoned by the Balochistan High Court for the cold-blooded murder Nawab Akbar Khan Bugti.
During Musharraf's authoritarian regime, heavy bombardment by Pakistan military on the villages of poverty ridden inhabitants of Dera Bugti tribal area, tens of thousands of people left their homes and livestock, and became destitutes in different provinces in Pakistan.
"These displaced people still live in abject poverty in tents and huts in different areas in Pakistan. The Pakistan army and its spy agencies precluded these displaced people to come back and resettle in their area, even after the induction of a new democratic government," they said. "The coup leader Musharraf and his military junta even thwarted the efforts of the U.N. agencies intervention to provide some relief to these poor displaced people by grossly violating international law. "
The two leaders said Pakistan's notorious spy agencies are engaged in abductions, extra-judicial killings and even desecrating the bodies of the secular Baluch political activists, who are vocal about regaining thw ownership of their occupied homeland from Pakistan.
"International human rights organizations and civil society are quite and their lips are sealed against Pakistani Army and its spy agencies brutalities against the secular Baluch people in Baluchistan. We urge the U.S. civil societies and human rights organizations to come forward and forcefully raise their voice against the Pakistan army and spy agencies for committing atrocities and war cimes in Baluchistan.
Meanwhile, the A.F.B. has invited all Baluch activists who believe in independence of their homeland to the Baluchistan International Conference in Washington D.C. November 21-23.
The conference theme is "Challenges Before & Strategies For Achieving National Liberation" and it is set to coincide with the second anniversary of martyrdom of Baluch Che Guevra Bala'ach Marri.
Baloch warna
Posted by Sarbaaz Baloch at 06:39