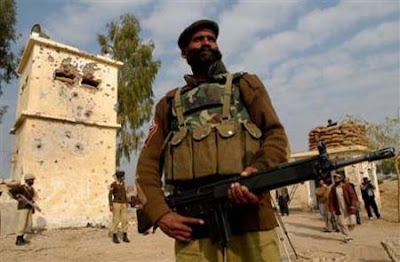 I was just reading today the latest news about the multi-billion dollar Pakistan aid bill currently awaiting President Obama’s signature, when I got an email about the recent abduction of a Norwegian citizen traveling in Pakistan.

According to a letter sent out today from the Baloch Human Rights Council of Canada to Norway’s representative in Ontario, Norwegian Ehsan Arjemandi had gone to Pakistan to visit his family in July.

The BHRC said Arjemandi was traveling to Karachi by bus in August when several “unidentified vehicles intercepted the bus, armed men got into the bus and took Mr. Ehsan Arjemandi out of the bus and covered his head with a black blanket and took him away.”

His family hasn’t heard from him since. The council said that witnesses to the abduction say that Arjemandi was abducted by a team led by Major Mohammed Shahid, a military intelligence officer.

The BHRC also said that it believes the Pakistan army and the Inter-Services Intelligence (ISI) carried out the abduction “to punish Mr. Ehsan Arjemandi and at the same time silence the voice of Baloch Diaspora against Pakistan army's brutalities in Balochistan.”

Balochistan or Baluchistan is an area that covers parts of Pakistan, Iran and Afghanistan. Baloch political leaders in Pakistan want greater control of the region’s resources, protection for the Baloch minority and a halt to the building of military bases. The government has also used the Baloch region to test its nuclear weapons.

Some militant forces want the entire Baloch region to be an independent country and have carried out bombings and other violent actions to get attention. Of course, Iran, Afghanistan and Pakistan want their territories to remain intact.

Pakistan’s Human Rights Commission backs up much of what the BHRC says about abductions and torture. It has tracked hundreds of Baloch political party members, students, doctors and tribal leaders who have been detained by government security forces, many disappearing for months or even years. Some have been tortured or have died in custody, according to the commission.

Members of Arjemandi’s family, who were already worried because Arjemandi has a heart condition, expressed fears that he would be tortured by the Pakistan military.

However, the human rights group said that they had confirmation that the Pakistan military had handed Arjemandi over to Iranian authorities who had transferred him to Zahidan prison.

The BHRC said it believes that Arjemandi’s life is now in even more danger because several Baloch political activists who were handed over to Iranian Authorities have been hanged after being tortured.

The U.S. aid package would give Pakistan $1.5 billion annually over the next five years ostensibly for democratic, economic and social development programs. That's all fine. Those programs should be encouraged. But it’s the part that allows “such sums as are necessary” for military aid that bother me.
Baloch Johd
Posted by Sarbaaz Baloch at 12:46