Pakistani flag has no honour and place in Balochistan 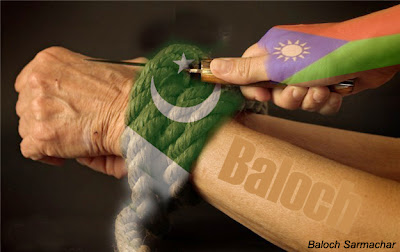 By Gedrozia Baluch (October 10, 2009): Because colours of the Pakistani flag of white are supposed to symbolize peace, harmony and mutual love and to live in peace. The colour green represents prosperity and progress. But this artificial state flag is far from these facts.

While in reality this state’s history is full of blood of the oppressed innocent people who died due to its (Pakistan) founder Mr. Mohammed Ali Jinnah.

Pakistan from its birth has been carrying crises and conflicts while millions were forced to leave their homeland from India and many were killed indiscriminately due to sectarianism. This was adopted and triggered by its founder Mr. Jinnah, for his desired Independent Islamic land while Muslims were living with Hindus and Sikhs in peace and security throughout the centuries in the sub-continent.

Because the main aim of creating any country is to ensure a decent life for it is people and to prevent them from misery. But with new born Pakistan, things came contrary to the logic and became a curse on it is own supporters as they tasted all kinds of torments, adversities and hatred and animosity and hostility to each other after so many years of coexistence, solidarity and brotherhood with each other before the British occupation of subcontinent and after British colonialism in form of collective struggle for independence.

Hence a lot of people consider the boundary between the dissident and the mother-country (sub-continent) of pure imagination, and that every Pakistani is Indian in origin, because every Pakistani had ancestors of the Indians, and was carrying identity and belongs to the Indian soil.

Britain was not serious about this division, but only was keen on any price of inability of Russian ambitions to engage and take control of the sub-continent and the neighbouring areas.

How was it possible for a single-minded man such as Mr. Jinnah, to force a super power like Britain, in order to secure a separate state for Muslims?? In fact, Britain was not interested in Muslims or any other religious group in India throughout the period of occupation of the subcontinent particularly when they intended to leave.

The best proof of the indifference of Britain for the composition of Pakistan as a separate entity is drawing the borders between Pakistan and the subcontinent within a period not exceeding one month, regardless of the endless complexities which resulted to an unfair division of assets and sources of income.

The biggest victim of Pakistan’s existence was Baluchistan, due to it's enjoyment of all elements of being sovereign status and has chance a rising a state because of its geopolitical importance along with the rich natural resources as well as it's southern coast which overlooks the Arabian Sea and the costal line which extends for more than 750 kilometres.

These reasons were enough to flood the saliva of Jinnah’s devil ambitions to invade and control over Baluchistan, the neighbouring independent sovereign state, and to force it to accede under the logic of power in 1948.

Since then, Pakistani rulers are displacing the local population from their regions to change the demography of Baloch areas. As well as replacement of the local Baloch language to Urdu, a derived language from Hindi, the language of Jinnah’s ancestor’s subcontinent, and imposed it in Baluchistan as the official language at schools and educational institutions. A desperate attempt to demolish the original and native Balochi language.

In addition to that, Pakistani non democratic and dictatorial rulers was/are continuously depleting and robbing all the natural resources for the management of all Pakistanis industries and institutions, particularly the military, which is using the wealth of Baluch land in suppressing and killing the innocent people of Baluchistan whenever they try to retrieve their stolen rights.

Therefore Baloch homeland is considered to be one of the poorest and least developed and have the most percentage of illiteracy, though having a rich ground of all natural resources that can guarantee development and prosperity to any nation.

As for Baloch, the master of the land, they realize the seriousness of this tumour in what is called Pakistan. They are trying to erase their identity and destroy their culture and history. Therefore Baloch resistance existed ever since Baluchistan was occupied by force and they will never give up their land at any price.

The reason why Pakistani establishment has failed in all it its desperate attempts to annex the Baluch culturally and intellectually, as they failed to include them on the ground, is that Pakistani rulers have ignored that there is a very big difference of tens of thousands of years between the history and culture of Baluch nation, and the history of underdeveloped Pakistan, which does not exceed some decades.

The simplest proof of that is the emergence of wonder and amazement in the faces of Pakistan’s ISI and FC forces when they see any citizen of Baluchistan in his traditional clothes such as turbans and baggy trousers, they are seen as strangers and foreigners in their own ancestral land by its occupiers who themselves emigrated from India in 1947 and forcefully ruling Balochistan.

In fact, their disdain from seeing Baluch people wearing such turbans and baggy trousers, this shows their ignorance. Because they do not realize that the symbolism of such turban with it is three or four meters, in existence for thousands of years than the age and history of new born Pakistan. And therefore it is not fair to compare the history of Baluchistan with the history of an unclear and incomplete growth state, Pakistan.

How a country like Pakistan can mock the values and history of an ancient civilization of a great nation when itself does not have any real history, except its dark history of destruction and loss. Maybe Pakistani establishment forgot that Baluchistan is not the right place to look for their lost identity, as their identity can be found in India, Pakistan’s origin.

So it is better for Pakistani rulers to think again and go back and join to the sub-continent were they had split from. If they are willing to have a history which can be remembered by the coming generation, especially that India has become one of the great powers, which is characterized by a strong and balanced economy, unlike Pakistan, the underdeveloped and dilapidated since its inception to date.

Finally, the fate of Pakistan, without any doubt is disappearing from the international map, because of the stiffness and resistance of the loyal people of Baluchistan in the face of the colonial State of Pakistan to defend their ancestral land (Baluchistan).

This is what we have learned from history that the end is definite for every iniquitous.