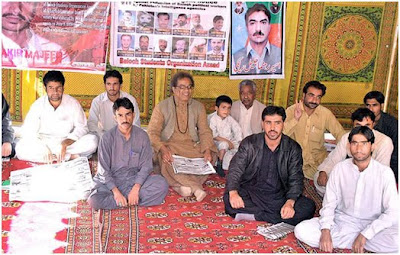 (Oct 26, 2009) Pakistani occupied Balochistan (Sagaar News BSO Azaad organized continues protests, rallies and public gathering in all over Balochistan (almost all the major cities Including Gwadar, Turbat, Noshki, Naal, Khuzdar, Quetta, Mashkey, Awaran and others) against abduction and illegal detention of Baloch political and none political Baloch masses by Pakistan.

The protestors urge United Nation and human rights organizations to take urgent notice on these human rights abuses. Thousands Baloch are abducted and it is continued as an every day routine job of Pakistan amry, not even a single Baloch (excluded few agents)is safe by the hand of occupier forces, it is now an emerging new culture of occupier army that they are abducting/arresting every single young Baloch and inhumanly torture in their underground cells, due to this culture of abductions the young Baloch are avoiding to go out of their homes, this culture of Pakistan army must be stop, the United Nation should force Pakistan to shutdown this inhuman culture, Baloch society that is struggling against the colonialism, the Baloch prisoner must consider as the war-prisoners, if they have done any thing illegally (violated the Laws as per United Nation chartered) so they must to produce in the front of courts, it is the worthiest war crime against Baloch nation are being conduct by the colonial Pakistan. Every nation have right to raise voice against occupier and it’s a birth right of Baloch to live free as till 27th of March 1948.

BSO Azaad will organize the protests, rallies and public gathering as per scheduled against illegal detention and abduction of Baloch political leadership and non political masses