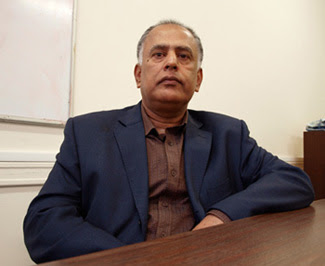 “We shouldn't identify Jundallah with the resistance in Western Balochistan as whole.”

Ismail Amiri was born in Iran, but today he belongs to the ever-expanding group of political exiles residing in London. Last time he stepped on his native Balochistan was six years ago after crossing the border illegally from Pakistan. However, he's been a member of the largest Baloch political party of Iran, Zrombesh, for over three decades. We talk with him on the resistance movement of a people condemned to assimilation in the farthest corner of the Islamic Republic.

What is Zrombesh?
The BNM (Baluch National Movement)-Zrombesh was an armed group that already fought the Pahlavi regime, before the Islamic revolution in 79. But with the advent of the ayatollahs to power, the repression forced many intellectuals to leave the country. In our case, it was a very small group compared to the rest of the country as ours was, and still remains, the most underdeveloped region. Many of us took shelter in Karachi (Pakistan) or in East Baluchistan. Zrombesh then turned into a political party. But a second problem came during the dictatorship of General Zia, when Islamabad outlawed Zrombesh. United Nations recognized political refugee status to our members, thanks to which many of us received asylum in European countries.

You say you are a political party: is it possible to do politics in Western Baluchistan?
What we call "visible activities" are those conducted from abroad because, due to Tehran´s control policies in Western Balochistan, all political activity must be developed in secret. In the times of the Shah we were persecuted just because we were Baloch but, today, we also have to add the religious difference. Unlike the Shiite Farsis in power, the Baloch are Sunni. Given the brutal assimilation to which we are subjected by Tehran, from Zrombesh we believe that independence of Baluchistan is the only way to ensure our survival as a nation. In our last congress in July, we took the decision to cooperate with the rest of the nations of Iran (Arabs, Kurds and Azeris) and join forces among the various Baloch coalitions.

Which are these coalitions? Zrombesh is the largest group and has the biggest trajectory but there's also the BPP (Baluch People's Party) as well as other smaller formations. Unlike us, the BPP is in favour of the creation of a confederal Iran. For us, this is only conceivable as an intermediate step towards total independence.

What´s Jundallah's position here? Jundallah is a Sunni Islamist group which conducts an armed struggle against the dictatorship of the Shiite Farsis in power. According to their vision of the conflict and their modus operandi, they hardly differ from the Taliban. From Zrombesh we don´t condemn the armed struggle as a whole but the way in which Jundallah conducts it: suicide bombings that kill innocent people, the inhumane conditions imposed to their prisoners or their eventual execution are methods we do not share, neither the Baloch resistance in Pakistan. We shouldn´t identify Jundallah with the resistance in Western Balochistan as whole.

What´s your view on their last attack which killed over 40 people?The attack was a direct response to Tehran's recent movements in Western Balochistan. There are no large population settlements and there´s no developed civil society other than that of the Farsis in Zahedan, the capital. So the regime in Tehran seeks to obtain the cooperation of the Baloch tribal leaders by any means necessary, no matter if its coercion or bribery. In fact, the attack was carried out during a meeting between government representatives and tribal leaders.

Several reports, both Persian and American, have denounced the alleged link between Jundallah and the CIA. What do you think? There´s a lot of speculation about this issue but the truth is that no one has any proof of such connection. However, it is striking that Jundallah´s members enjoy an impunity in Pakistan which is unthinkable for the insurgents in East Balochistan. That's why many people believe that the Pakistani secret services give them a preferential treatment to them as they do with the Taliban.

Iranian Kurds are also Sunni and, therefore, hard hit by the Farsi and Shiite elite in power. Which are, if any, the differences between both minorities in Iran?Both Kurds and Baloch are non Farsi and non Shiite. Nonetheless, I think the Kurdish situation is slightly different from ours because they enjoy an autonomous region in northern Iraq which serves as a refuge for the Kurds in neighbouring Turkey, Iran and Syria. In our case we cannot think of taking refuge in Pakistan or Afghanistan, otherwise, we would not be talking in London now.

Karlos Zurutuza is a freelance correspondent and writes in Basque, Spanish and English. His work has been published in several newspapers and magazines.
Posted by Sarbaaz Baloch at 10:37