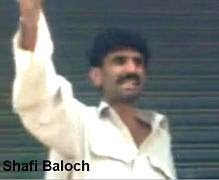 Quetta Junior Joint Secretary of B.S.O. Azaad, Mr. Shafi Baloch has been abducted by Pakistan’s secret agencies while he was on his way back after attending a public gathering at Balochistan Medical College, in Shaal (Quetta). According to BSO- azaad’s official website http://www.sagaar.org/ On 7 November Shafi Baloch was first apprehended by the Pakistani police and taken to Barori road police station and then shifted to an undisclosed location. He was kept in the police station for 5 hours and then handed over to the Pakistani army. Shafi Baloch’s abduction provoked and disappointed the Baloch youth and his family but it comes as no surprise to anyone.

Shafi Baloch is just another name that has been added to the list of already thousands of missing Baloch students, political activists and ordinary Baloch. The Sagaar statement further reads: “B.M.C. has recently seen the brutal thrashing of the female students of medical sciences by Pakistan army where another incident of kidnapping has taken place by Pakistan army. The witnesses of the incident stated that Shafi Baloch was immensely beaten at the spot by the officers of the said police station which resulted in injuries to him, later on the Police even denied the incident and said that they didn’t know anything about it”.

It has become a trend of Pakistan’s police and the criminal army that they deny the abduction of Baloch activists after snatching them from Universities, colleges, and public places.

No one either in judiciary, provincial government or from the federal government dares to question the notorious criminal general for abducting Baloch students. The Pakistani media also ignores the atrocities against the Baloch people that their own army is committing, thus becoming a partner in crimes of the intelligence agencies.
Pakistan has stepped up the abductions of Baloch youth and killing them in cold blood while in detention. Several top Baloch political leaders have already been murdered while in custody and the relatives of the missing person fear that the rest of the missing person either have already been murdered or they might be murdered if the International Human Rights organisation and the UN do not take timely action and pressurise Pakistan to surface the missing Baloch activists. 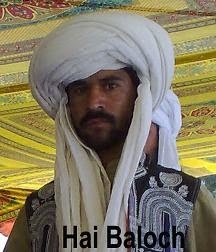 Mr. Hai Bezinjo Baloch, a resident of Mashkay and a student of social works at Balochistan University has been abducted today (11-09-2009) by Pakistan army. Hai Baloch, also a member of B.S.O. Azaad, was taken off a bus in Shaal(Quetta) by Pakistan army personals and was thrashed in front of all passengers, he was blind folded and taken away to an unknown location.

Students in Balochistan are facing difficult conditions where the universities and colleges are turned into army garrisons by Pakistan and each day has its own stories of humiliation, torture, forced disappearances and killing of innocent Baloch students. 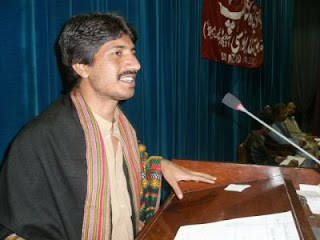 The Senior Vice President of B.S.O. Azaad, Zakir Majeed is also among the thousands of Baloch missing people who are facing dire consequences for raising their voice against the oppression of Pakistan army and the occupation of their motherland.

Zakir Majeed Baloch is also one of the members of Baloch Watan Dost committee which was constituted to secure the safe release of UNHCR head in Balochistan Mr Jhon Solecki and missing Baloch people.
It is worth reminding that another member of Baloch Watan Dost committee Shaheed Ghulam Mohammad Baloch was abducted by Pakistani intelligence agencies from Turbat Town along with his two companions in broad-day-light and they were later killed in custody. Zakir Majeed Baloch has twice been detained in past and release after sever torture, similarly Shaheed Ghulam Baloch and Sher Mohammed Baloch had been detained and had been tortured before their cold-blooded murder on 8th April 2009. Mr Zakir Majeed Baloch’s family members expressed fear that Zakir Majeed Baloch might suffer the same fate as Ghulam Mohammad Baloch and his friends. International Human Rights Organisations and the UN must take notice of Mr Zakir Majeed’s arrest and pressurise Pakistan’s government for his safe release.
More on Zakir Majeed: http://www.balochwarna.com/modules/news/article.php?storyid=1937

Councilor appeals for brother’s recovery
Councillor of Oryani area in Kohlu Mr.Kamal Marri has said that his brother Sohrab Khan Marri has been abducted from Agha Khan Hotel in Quetta. Mr Sohrab Khan Marri who has no affiliations with any political parties had come to Quetta to find out about a job.

According to his brother he had given an interview for a job in live stock department and had come to Quetta, the capital of Balochistan to get further information about the job interview. He has been taken away by plain clothed officials, apparently from the Intelligence agencies of Pakistan.

Mr Kamal Khan said that even though the Chief Minister of Balochistan Mr Raisani talks to improving the situation in Balochistan but innocent people like his brother are being abducted on daily basis and the government has failed to help them. “How can the situations get better when poor people are being abducted regularly by the security forces for crime they did not commit”, asked Mr Kamal Marri. He appealed from the Balochistan government to play their role and make sure of his brother safe recovery and early release.
BalochWarna
Posted by Sarbaaz Baloch at 10:18