The tale of two missing Baloch 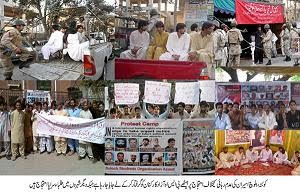 * Marri’s brother says no police station willing to register case of his brother’s disappearance due to intelligence agencies’ involvement* Dr Din’s brother says court keeps on giving new dates
By Malik Siraj Akbar
SHAAL (QUETTA): Chakar Marri, a 23-year-old zoology student at Balochistan University, has “gone missing” after the Frontier Corps (FC) took him into custody on September 3.
On condition of anonymity, a friend told Daily Times some students had gathered outside the university’s arts gallery to meet the vice-chancellor to request him to reopen the institute. The VC told them to wait for some time. All of a sudden several FC officials approached them, roughed them up and took along with them. Marri’s family said the FC officials later handed over Marri and his colleagues to intelligence agencies near the railway station. Some of the students were freed, but the others are still missing, they said.
Marri’s brother, Changez Marri, said the family had never indulged in anti-state activities. He also said no family member had ever been arrested in a criminal case or sentenced by any court of law. “I am not defending my brother or any of the missing persons. If they are guilty of breaking the law of the land they should be produced before a court, held in a ‘regular jail’ and provided a fair trail.”
Involvement: Changez said no police station in Quetta was willing to register a case for his brother’s disappearance because intelligence agencies were involved. He said the restored judiciary had not taken up the issue of the missing persons, and human rights organisations had not agreed to take up the matter. “Today, the chief justice of Pakistan looks very different from the one who once who took a stance for the recovery of the missing persons. He is silent over the plight of the Baloch missing persons,” he said.

Changez said his mother kept asking him about the whereabouts of her missing son. “I feel very guilty over not having ‘good news’ for my mother every time I am inquired at home,” he added.
Professor Mohammad Siddiq Baloch, the principal of Government College Mashky in Awaran district, echoes Changiz’s sentiments. Siddiq’s younger brother, Dr Din Muhammad, 32, a medical officer at a healthcare centre in Ornach sub-tehsil of Khuzdar district, was also whisked away by the intelligence agencies on June 28. According to Mohammad Ramzan, Din’s peon, around seven plainclothesmen wearing masks beat him up, tied his hands and took him away. When Siddiq approached officials of Ornach police station, which is located a few hundred yards from the health centre, the officials expressed their “inability” to register a case that directly nominated the intelligence agencies.

Unwilling: “However, police agreed to register a case against “unknown people”. The police did nothing to recover my brother until I submitted a petition at the Balochistan High Court on July 5,” Siddiq added. “Despite several hearings, the court continues to give new dates for the proceedings as the agencies officials are not willing to appear before the court.”
Siddiq said his brother’s wife had fallen victim to depression and their mother’s eyes were always filled with tears, adding that three of Din’s sons looked forward to receive their father. “Balochistan needs a healing touch but the disappearances of our family members is increasing the hatred against the state in the hearts and minds of our schoolchildren,” he concluded.
Balochwarna
Posted by Sarbaaz Baloch at 11:09