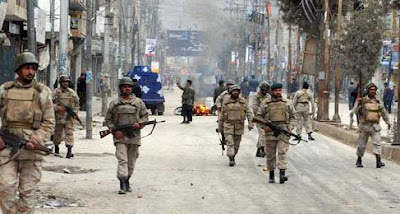 Quetta: The Balochistan University requires funds to improve its existing security plan in the wake of mounting threats faced by the country’s educational institutions.

University officials said, “Ours is perhaps the only university in the world where trains move regularly on the campus, making it impossible for the university administration to establish a wall around the railway track to minimise the risk of terrorist attacks.”
“We need additional funds, millions of rupees to upgrade the security of the university,” said another official.

“The government is trying to convert the university into a garrison under the pretext of restoring peace. We do not face any threat from outside. Frontier Corps are our major concern as they have rounded up many students in the past. They also beat up a professor,” Hamal Baloch, a Baloch Students Organisation leader, said.

Under the new security plan, the parking lot has been shifted outside the campus and no one is allowed to park his or her car inside the university. All faculty and students are required to display their identity cards.

“We have installed several CCTV cameras and raised the boundary wall and barbed wire has been fixed on it,” a university official said. However, there is still room for improvement, for which we need funds.”
http://www.dailytimes.com.pk/default.asp?page=2009\11\14\story_14-11-2009_pg7_15
B.S.O. Azaad faces yet another abduction of its member

Baloch Student Organization Azaad, a platform for Baloch students to politically work for the Independence of Motherland Balochistan and to raise the human rights violations in Balochistan, has been one of the major targets of Pakistan (Punjabi) army. Dozens of its members are presently in the custody Pakistan army, out of which quite a number of members are kept in the famously brutal secret torture cells of Pakistan army, including the Senior Vice President of B.S.O. Azaad, Zakir Majeed, a student of literature, the Junior Joint Secretary Shafi Baloch, Mushtaq Baloch, Hai Baloch and Najeeb Wali Baloch. These steps clearly reveal the intentions of Pakistan to keep the Baloch students away from the educational institutions and to suppress their voice against the atrocities carried out by Pakistan in Balochistan.

This time the victim of the illegal abduction (according to International Human rights charter) is a student of Pharmacy and former Unit Secretary of Balochistan University Unit, Naseer Baloch. On Thursday, 12th of November 2009, by 2:00 p.m. when Naseer Baloch after attending his classes was returning home, was surrounded by a group of 8 army officials at the gate of Balochistan University, and after confirming his affiliation with the human rights activism he was taken away to an unknown location. Naseer Baloch, who basically belongs to Khuzdar came for advanced studies in Shall (Quetta) as no other higher institutions are available in the vast area of Pakistani occupied Balochistan.

The Junior Vice President B.S.O. Azaad, Miss Karima Baloch, responding to the recent crackdown on Baloch students by Pakistan stated that if the educational institutions in Balochistan are not meant to educate Baloch themselves and if these institutions are serving as army garrisons for Pakistan, where they torture and humiliate the Baloch students, then such institutions have no moral grounds to remain in Balochistan. She revealed that the faculty of these institutions, who mostly belong to Punjab, is helping Pakistan army to abduct Baloch students by pointing out the brighter students who have more capabilities to change the fate of the colonized people of Balochistan.
By: www.sagaar.org
Posted by Sarbaaz Baloch at 16:44