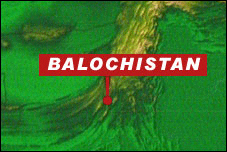 QUETTA/DERA MURAD JAMALI: One person was killed and four others injured when a grenade was hurled at a shop on Quetta Road on Tuesday, police sources said. According to the district police chief, Nazir Ahmed Kurd, three men on motorbikes hurled a grenade into a welding shop owned by a settler, Mukhtar Ahmed, and fled the scene. One of the workers in the shop, Ghulam Hussein, died while the shop owner Mukhtar Ahmed, Muhammad Akbar, Muhammad Azhar and Muhammad Akmal were seriously injured. Police have started an investigation.

According dailyTawar news paper BRA (Baloch Republican Army) claimed the responsibility for the attack on the settlers in Dera Murad Jamali.

Separately in Quetta an FC personal was shot dead while he was standing at the fruit shop. According to details the FC personal Khalid was standing at the fruit shop when unknown men opened fire at him, he died at the spot. The attackers managed to escape from the scene. On the other hand a huge blast has been heard in Khuzdar but the place of the blast has not been identified yet.

A spokesperson of BLA (Baloch Liberation Army) called news agencies and claimed the responsibility for the killing of the FC personal in Quetta. Mr Jaind Baloch also claimed the responsibility for killing a Workers Party member Mr Shams in Khuzdar. Mr Jaind said that his organisation had warned the Workers Party member to mince his way and quite his anti Baloch activities but he had ignored the warnings. Eventually the Organisation has decided to kill him.

In addition BRA’s spokesman Mr Sarbaaz Baloch claimed that his organisation have killed three settlers and injured five in Dera Murad Jamali. He said the blast was carried out using a remote controlled explosive. He also claimed to have blown up an FC vehicle which at Gandoi area of Sui. The vehicle was being used to supply ration to the FC camps. Mr Sarbaaz alleged that three security forces personal were killed and ten others injured this attack.