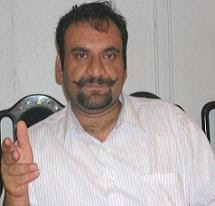 Norway said it will take up the issue of one of its nationals, who went missing after being abducted by the Pakistani Military Intelligence in the restive Baluchistan province more than six weeks ago, at a meeting with Pakistan foreign minister during the United Nations General Assembly in New York.
A senior official of the Norwegian embassy in Washington DC said his country's foreign minister Jonas Gahr Støre would raise the issue of the abduction of Ehsan Arjemandi, 34, with his Pakistani counterpart Shah Mehmood Qureshi when the two meet during the UN general assembly in New York.
Ehsan Arjemandi was abducted by a team led by Military Intelligence officer Major Mohammed Shahid, who is posted in coastal Mekran Division, local Baluch sources said.
"We do not know if he is alive or dead," his brother Ali Arjemandi said on phone from Oslo.
But Oslo which gives as much as 800 million krones to Pakistan each year in humanitarian assistance was confident Islamabad would not take such an extreme measure against one of its national. "After all this pressure, we do not think they would take such a radical step," the Norwegian official said.
At least two Baluchistan ministers, Mir Zafarullah Zehri and Ehsan Shah -- both with known contacts with officials of the Military Intelligence and infamous Inter Services Intelligence -- had without success tried to arrange a meeting between Ehsan Arjemandi and one of his brothers, Musa Arjemandi who travelled to Quetta from Oslo for his brother's freedom.
Ali Arjemandi said his brother's case is being handled by Iqbal Haider Advocate, who is trying to get a First Information Report lodged against his abductors. There are little chances of justice for those who are abducted and made to disappear in Baluchistan by the Pakistani intelligece spooks.
Since Pakistan is a rogue state, officials of the supra state Military Intelligence and ISI seldom acknowledge their extra judicial acts. On April 3, when three prominent political activists Ghulam Mohammed Baluch, Lala Munir Baluch and Sher Mohammed Baluch were abducted their lawyer Kachkol Ali tried to register an FIr against the intelligence sleuths and bring the matter to the notice of the judicial authorities without success. The badly mutilated bodies of the three were found four days later.
On top of the killings by the intelligence sleuths, Pakistan home minister announced a reward for those providing information about the killers of the three activist.
Though a civilian government is in place in Pakistan for more than one-and-half years, Occupied Baluchistan is primarily being run by the powerful military and para-military forces and intelligence sleuths under the colonial. cantonment policy.
Arjemandi had obtained his visa on Juy 23 from the Pakistan embassy in Oslo and had arrived in Pakistan three days later. He was returning after visiting relatives and friends in the Makran towns of Mand and Turbat. He was returning to Karachi when a mixed convoy of Military Intelligence sleuths and police abducted him after stopping the bus he was travelling in at the Zero Point in Uthal.
He is on medications and his family is extremely concerned about his fate. Arjemandi's relatives in Karachi had tried to lodge a First Information Report, but police rejected their appeal.
Later on August 23 a leader of the Baluch National Movement Rasool Baksh Mengal was abducted by intelligence officials from the same area from where the Military Intelligence abducted Arjemandi. His mutilated body was found hanging from a tree 40 miles away.
In a letter to to Pakistan chief justice Iftikhar Chaudhry, Ali Arjemnndi sought the help of the highest court for his brother's freedom and asked him to order the Pakistani authorities to produce him in front of a court if he committed any crime or release him.
"The only crime he has committed is that he is a Baluch," Arjemandi's brother wrote to the chief justice.
Ehsan Arjemandi was active in Europe to expose the human rights violations of the Baluch people by the Islamic Republics of Pakistan and Iran. He is a former general secretary of the Greater Baluchistan Organization.
Even prior to the kidnapping of Arjemandi, Norway had raised the appalling human rights situation in Baluchistan at the two-yearly meeting in Islamabad. Norway's assistance is based on respect for human rights.
Baluchistan is in the throes of a bloody military operation for five years now. The Texas-sized territory was annexed against the wishes of the Baluch people on March 27, 1948.
Tens of thousands of Baluch have been killed in their struggle for independence since then.
Meanwhile, two presiding council members of the DC-based American friends of Baluchistan called upon the Norwegian government to cut off all aid to Pakistan without further delay.
"The Baluch have the greatest regards for the state, government and people of Norway who are beacons of human rights for all nations. Please help end torture and disappearance of Mr. Arjemandi and at least two thousand other Baluch patriots," Rasheed Baluch of Dallas, Texas, and Ghafoor Baluch of Miami, Fla., urged.
Baloch Warna
Posted by Sarbaaz Baloch at 09:45