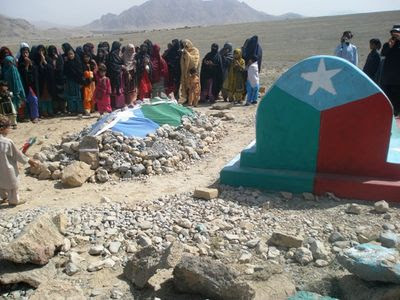 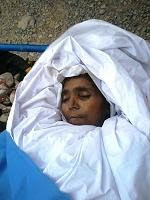 Quetta: A large number of Baloch men, women and children gathered in News Kahan Quetta to mark the first Martyrdom anniversary of Banuk Gull Naz Marri. Banuk Marri was martyred on the night of 16 September 2008, when Pakistani security forces (FC) raided New Kahan Quetta. They opened fire on the people coming out of the Masque after readying (taraveeh) prayer. Gull Naz Marri, 50, mother of four children, was shot in the chest and several others injured as well. She died because of bleeding as the FC did not allow anyone to take her to the doctors.

Prayers were offered for the departed souls of thousands of Baloch named and unnamed Martyrs who have sacrificed their lives protecting Baloch honour and Baloch motherland.
The speakers said that Baloch women like other Independent seeking nations are playing an important role in Balochistan’s Liberation struggle. They said that Baloch sisters were struggling shoulder to shoulder with their Baloch brothers against the occupying forces in Balochistan. “The martyrdom of Banuk Gull Naz Marri, the injuring of Banuk Shahnaz Baloch and the illegal detention of zarina Marri are all signs of Baloch women’s active participation in Baloch Liberation Movement.
In the end of the first martyrdom anniversary of Shaheed Gull Naz Marri the participants prayed for the success of Baloch Freedom Struggle and Baloch Freedom Fighters. The event was Organised by Injuman-e-Itehad-e- Marri.
Baloch Warna
Posted by Sarbaaz Baloch at 14:40