US threatens airstrikes in Balochistan 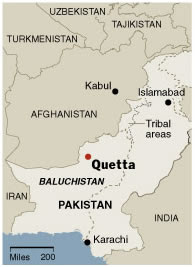 (Sep 28, 2009) LAHORE: The United States is threatening to launch airstrikes on the Taliban leadership in Quetta, the Times reported on Sunday. The threat comes amid growing divisions in Washington about whether to send more troops or reduce them and start targeting the terrorists. In a leaked strategic assessment of the war, top US and NATO commander in Afghanistan, General Stanley McChrystal warned that he needed reinforcements within a year to avert the risk of failure. Although no figure was given, he is believed to be seeking up to 40,000 troops by the end of this year. Last week McChrystal denied any rift with the administration, saying “a policy debate is warranted”. The Biden camp argues that attacks by unmanned drones on Pakistan’s Tribal Areas, where many Al Qaeda leaders are thought to be hiding, have been successful. Sending more troops to Afghanistan has only inflamed tensions. The Times story quoted “senior Pakistani officials in New York” as saying that the US had asked to extend the drone attacks to areas of Balochistan, including Quetta. There has been tacit cooperation over the use of drones although publicly Islamabad denounces their use. Some British officials told the Times drone attacks on Quetta would be “unthinkable”. Western intelligence officers have alleged that Taliban sympathisers have helped some of the insurgency’s leaders to move to Karachi, where it would be impossible to strike. daily times monitor.

Baloch Analysts:"It should be clear to everybody, that Pakistan will never fight Taliban and al Qaeda, because these organizations are assets, and reason of getting money, and black mailing western alleys in order to get more and more money." Ali Raisi

"That means Pakistan is not only using Taliban against Baloch but now she wants to deceive Americans to bomb Baloch freedom fighters in the name of her so called war on terror.Before any drone attack onQuetta Pakistann will alert Taliban to leave the targetedplace. Like drone attacks in tribal area here also the victims and casualties will be innocent Baloch and Pashtun civilians." Ameeri