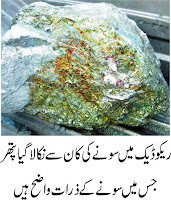 On June 14, 2008 there was a well attended demonstration outside the Quetta Press Club.This incident was well reported in the National news papers, but it did not make any headlines nor any ripples were caused in the national way of life of an ordinary Pakistani citizen. This event passed un-noticed and was soon forgotten as many fiascoes and malfeasance are wiped like dust under the carpet in Pakistan. Why were these people agitating? This will be deliberated subsequently, but the point of concern and worth noting is that no one from the Government whether it was the CENTRAL or the PROVINCIAL took any note of this minor incident.

One NGO by the name of AZAT foundation tried to highlight the rights concern and miseries of these demonstrators.The reason for this commotion, brouhaha and demonstrations were the termination of the services of out sourced workers by Pakistani Contractors such as Capital drilling, Security 2000, RAK MOR Drilling, Zain Company, Zia & Brothers.

In April 2008, Zain Company terminated the services of 40 (forty) drilling assistants and recruited novices and non-locals. This caused a lot of resentment and indignation amongst the local population and this was the focal point and reason for the demonstrations in front of the Quetta Press Club.

One Ponders why such high profile companies are working with alacrity in Balouchistan and what are the stakes? The stakes must be very high for such mega conglomerates who are rapacious and reticent to work in remote undeveloped hazardous, hostile and barren terrain.

The reasons are the high deposits of gold and copper which are found in REKO DIQ and SAINDAK in Balouchistan.

Reko Diq is a small town in Chaghi District, Balouchistan having the worlds largest Gold and Copper reserves. Reports emerging from various sources indicate that the US $ 65 Billion natural deposits might have been sold for a meager US $ 21 Billion to TETHYAN COPPER of Australia which has taken the contract to develop this mine while BARRICK GOLD CORPORATION of Canada (a JEWISH Company) and ANTOFAGASTA of Chile have a joint-ownership of the copper-gold deposit at REKO DIQ.

Economistan.com: Jewel in the Crown: Reqo Diq Copper and Gold Deposits in Balochistan Province of Pakistan
Posted by Sarbaaz Baloch at 11:23