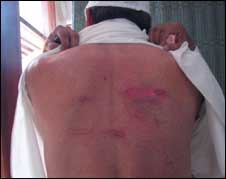 On last Sunday FC firing wounded many; Ms Shahnaz was also one of them. Shahnaz is from a remote town of Balochistan known as MAND, it was her first ever participation in public gathering held in TUMP. She didn’t know that first ever step to be part of gathering would pose grave danger to her life.
On Sunday, Frontier Constabulary opened fire in TUMP, wounded Ms Shahnaz; she was attending the Soyam “Memorial gathering on 3rd day of death” of young poet Mir Jan Meeral at TUMP High School, Meeral was killed by FC few days back.
Shahnaz explains, men, women and children were attending peaceful gathering and listening to Balochi poetry, all of sudden peaceful gathering turned into blood bath. FC surrounded the High School building and entered, neither they asked people to leave or end the gathering instead they baton charged indiscriminatingly and sprayed bullets.
Shahnaz further shared, that her 20 year old cousin received bullets and fell down, she ran away towards him but ended up receiving bullet on her neck. Women took her to TUMP hospital, doctors gave her initial treatment then she was taken to Turbat Hospital and then to Karachi. During this indiscriminate firing, Shahnaz’s cousin a 10th grade student Mukhtar Baloch was killed and her father Abdul Rehman was injured.
Shahnaz is a primary school teacher at Former Federal Education Minister Ms Zubeda Jalal’s school, received bullet on her neck, she tells that she can not move her right hand and arm, using oxygen mask and going through extreme pain.
When I asked her, what made her to participate in socio-political gathering, she said, Baloch are not getting their economic rights for example Balochistan provide gas to rest of the country but people in Balochistan are still using Iranian LPG gas cylinders, at times it costs them Rs 1,000 to 1,500.
Shahnaz’s father Abdul Rehman Rind believes that his life has turned bleak, young daughter is on death bed, his nephew; he raised him like his own son was killed.
But I feel satisfied that my nephew died for the country, his crime was that he was part of peaceful gathering. Abdul Rehman shows his wounded back, he said, FC attacked them as if they were attacking the enemy forces. Abdul Rehman owns a Dumper Truck, for Shahnaz, he sold his land, he explains that in Turbat Hospital, even they are not equipped to treat Malaria so he had to bring Shahnaz to Karachi. Rehman protests that peaceful gathering is our democratic right; even after this brutal attack he will never stop his kids to attend any sociopolitical gathering.
http://www.balochwarna.com/modules/news/article.php?storyid=2159
Posted by Sarbaaz Baloch at 11:55