“Military Operation Has Been Escalated In Balochistan; Baloch Women Were Abducted From Dera Bugti.” Sister Of Zakir Majeed 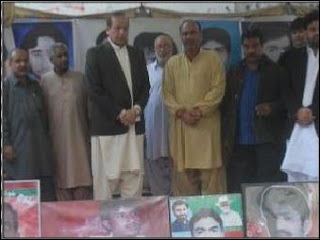 The hunger strike camp of the families of Baloch missing persons entered its 1055th day in total and 55th day in Karachi.

A delegation of BNM Gwadar visited the camp here in Karachi and expressed solidarity with the families of abducted Baloch and assured them of their support. While talking to the family members of victims the BNM delegation said that since the occupation of Balochistan by Pakistani and Irani forces Baloch intellectuals and revolutionary sons of soil are struggling to regain the sovereignty of Baloch state. It is the determined struggle and sacrifices of Baloch sons that today the struggle has turned into a full fledge freedom movement.

“Occupying forces have escalated the army operation and Baloch genocide in Balochistan, state is trying to frighten the people of Kohlu, Kahan, Dera Bugti and Mashky by using brutal and violent methods,” Said Vice chairman, General Secretary of VBMP sister of Zakir Majeed and Mehlab Baloch daughter of Deen Mohammad to the delegation.

They said the Pakistani power drunken Army is torturing Baloch women and children, many women were disappeared by Pakistani forces in Dera Bugti few days back. Situation in Khuzdar is also similar to the one in Dera Bugti, Kohlu, Kahan and elsewhere in Balochistan. Pakistani army is burning the houses of Balochs to build army cantonments.

Pakistani forces have read the book of hitler to brutalize Baloch nation for the land and resources of Balochistan, Said Mama Qadeer while talking to delegation.  He further said that Pakistani forces know very well they have to leave this land sooner or later then I don’t understand why are they using the name of Islam.

The families of abducted Baloch appealed to international community to take immediate notice of Pakistani barbarism in Balochistan.