Ten more Baloch abducted by the Pakistani forces from different parts of Balochistan. 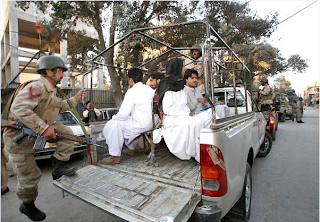 Occupied Balochistan: Pakistani military and its secret agencies have abducted 10 more Baloch from Panjgur and Gwadar district. According to reports Pakistani forces, in a pre-dawn raid in Panjgur, abducted Master Abdul Rehman along with four other friends and took them away to unknown location.

According to locals of the area Pakistani forces surrounded Gharibabad Chitkan and then entered in houses. Forces broke valuables, beat the locals and abducted five men, which were identified as Master Abdul Rehman, Shakir Baloch, Karim Jan, Ghulam Jan and Aman Jan.

Meanwhile the Spokesman of Baloch Human Rights Organization (BHRO) said that Master Abdul Rehman is a teacher in a government school in Chitkan, while Karim Jan is working with Pakistan television (PTV). Spokesman said, ''The forces maltreated women and children, broke into the houses of residents and fired shots to cause fear in the area.''

The Spokesman further said, Karim Jan, Ghulam jan and Shakir belong to the same family. Forces have already abducted four other members of Ghulam Jan's family from Karachi in the end of January 2013.

''Ghulam Jan's son Ijaz Baloch was abducted on 24 January from Dalmia Karachi and 3 members of their family namely Ifthikhar Baloch, Zahid Baloch and Waseem Baloch were abducted from Raess Goth Karachi on 28 January. All the abducted are still missing without any trace.''

Separately, the Pakistani secret agencies personnel have abducted Parvez s/o Khan Mohammad and Suleman Baloch on gunpoint from a Gwadar bound passenger bus. Both persons are residents of Gwadar town.

Famous Balochi language poet Dad Kareem aka DK Baloch along with Shafi Baloch and Sagheer Baloch abducted from coastal town of Jiwani in district Gwadar. According to reports, on 22nd February about 11pm, Pakistani forces have abducted the Dad Kareem, Shafi Baloch and Sagheer Baloch from Dirhana area of Jiwani during their picnic party. They all are residents of Jiwani town of Balochistan.