Jail me but free my dad, Families demand release of missing Baloch 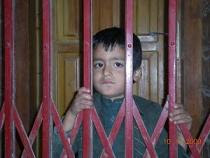 Meet three-year old Beurag Baloch. He is the son of Jalil Reki, the central secretary information of the Baloch Republican Party (BRP), who went missing since the early days of 2009. Beurag tells us that he believes his father was picked up by the agencies. He does not exactly know what “agencies” mean and what their job is. Yet, he says he misses his “missing father” very much.
His dad is among thousands of Balochs who are currently “missing” after being whisked away by the country’s intelligence agencies. They say some 4000 Balochs have “disappeared” at the moment.
Beurag held my hand and asked me to take his picture pretending to be behind bars in order to convey his willingness to go behind bars in return of his missing father’s release.
“Uncle, can you do me this favor,” he asked this afternoon.
I could not promise but assured to convey his message with his own photograph to everyone that this young child is volunteering to go to Pakistan’s torture cells in return of his father’s release from the custody of the intelligence agencies.
http://gmcmissing.wordpress.com/2009/ ... /jail-me-but-free-my-dad/
Thanks to Malik Siraj
Families demand release of missing Baloch
* VMP says govt has broken promises, forced disappearances continuing in Balochistan
By Malik Siraj Akbar
QUETTA: Families of missing Baloch persons on Tuesday staged a demonstration in front of the Quetta Press Club against the government, alleging that it had failed to deliver on its promise of recovering their missing relatives.
The rally, which was attended by over 40 families, was organised by a newly-formed group called the Voice of Missing Persons (VMP), which is working to raise the issue of enforced disappearances in Balochistan.
Protesters carrying photographs and posters of their missing relatives chanted slogans against the government and called on national and international human rights organisations to take notice of the increasing number of missing Baloch people.
Talking to Daily Times, VMP Chairman Nasrullah Baloch said the demonstration was meant to remind the country that the chapter of enforced disappearances had not closed with the ouster of former president Pervez Musharraf.
Instead, he said, incidents of forced disappearances had once again reached an alarming level.
Baloch nationalist parties claim that around 4,000 are missing from across the province, arrested during the military operation initiated during the Musharraf regime.
“It is regrettable that the present government and the chief justice of Pakistan have completely ignored the issue. They have stopped talking about it, which has ruined several families across Balochistan. Families of the missing persons are devastated and left in the lurch by the government,” he said, demanding the government resolve the issue as soon as possible.
He rejected Interior Minister Rehman Malik’s claim that the intelligence agencies had stopped picking up Baloch people.
He also criticised Federal Parliamentary Affairs Minister Babar Awan for presenting the same list in the Supreme Court, which he rejected himself in 2007. “We are surprised that Babar Awan stood with us as an opposition leader on the issue of missing persons.”
The VMP chairman said the families of the missing persons would stage another protest against the forced disappearances in front of the Balochistan High Court to present a memorandum to the chief justice of the Balochistan High Court (BHC). The families would also organise a hunger strike camp in front of Quetta Press Club to demand the release of the missing persons, he added.
http://www.dailytimes.com.pk/default.asp?page=2009\11\11\story_11-11-2009_pg7_29
Posted by Sarbaaz Baloch at 07:40