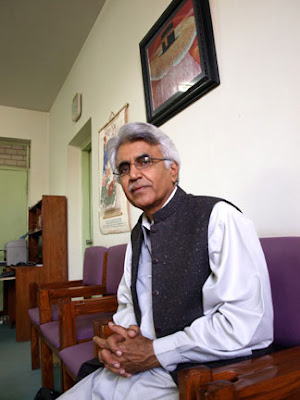 “The antagonisms between the clans have disappeared; today our people are united in the fight against the state.”

All those interested in the history of the Baloch people should read “Baloch Nationalism, its origin and development” (RBC, 2004)* by professor Taj Mohammad Breseeg. Born in Chabahar (West Baluchistan), today Dr. Breseeg teaches History at the University of Balochistan, Quetta (East Baluchistan), after several years of working at the University of Uppsala in Sweden. Both his life trajectory and his work in the field of research give him a unique perspective on his people. He shares a bit of it with us in the following interview.

What is the general situation in Tehran-controlled Balochistan? National minorities like the Kurds, the Turks, the Baluch...not only are not represented in the Persian state, but also suffer a constant assimilation by the Persian nationalism. Added to the terrible repression our people have to suffer, Iran has replaced the original Baloch toponymy and has also included historic Baluch areas within the border regions of Kerman and Khorasan. West Balochistan is the paradigm of brutal assimilation.

Can the situation be extrapolated to Pakistan? No doubt. Replace previous minorities by Sindhis, Pashtuns and Baluch, and you can also talk of a 'Punjabi nationalism.' However, the Baluch in Pakistan have a provincial government and some political recognition. In Iran, however, no Baluch party is legal. Apartheid in Iran is comparatively higher because Shiism is the only official religion.

What about North Balochistan?Afghan Baluch live mainly in the provinces of Helmand and Nimruz, two areas hard-hit by the war. Their first and main handicap is their low numbers. However, they have recognition in the Afghan Constitution: the Baluch have a regional language category and there is even a minister in the government, Karim Baloch.

The Baluch are not only divided by three states but also suffer the consequences of living in a distinctly tribal society. What are then the unitary traits of your people? We have a language and a common history in the region, as old as the Punjabi or the Persian. The tribal system is more powerful in Pakistan and is a direct manifestation in both local government and in the various armed organizations. Iran is a more prosperous, more developed state, therefore tribes have little real power in the Persian society. In any case, the antagonisms between the clans have disappeared, and today our people are united in the fight against the state.

The Baloch resistance movements are active on both sides of the border. However, they seem to have different agendas…All of them are fighting against a totalitarian state, call it Iran or Pakistan. However, there are big differences between the armed movements. The resistance in East Baluchistan is a secular and leftist movement which struggles for total independence of Baluchistan whereas in the west, the People's Liberation Army of Iran (formerly 'Jundallah') has a strong Sunni ideology and seeks greater degree of autonomy as well as recognition of national rights, but without breaking the rule of Iran.

Note: Prof. Taj Mohammad Breseeg is also the author of “Standarization of the Balochi language” (in farsi)

Karlos Zurutuza is a freelance correspondent and writes in Basque, Spanish and English. His work has been published in several newspapers and magazines.

The Baluch
Posted by Sarbaaz Baloch at 09:08