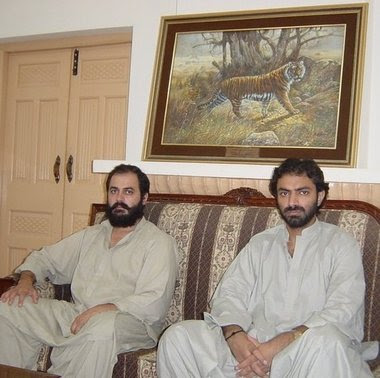 Shaheed Balaach Marri [left] with Baluch national hero Brahumdagh Bugti.
A number of international activists, scholars and human rights practitioners will be participating in the first-ever Baluchistan International Conference in Washington DC on Nov. 21-22.
The American Friends of Baluchistan, an organization that supports the independence movement, has organized the conference.
The conference has been organized to highlight the Baluch issues in Eastern and Western Baluchistan -- now under Pakistani and Iranian occupation -- and to pay tributes to slain Baluch freedom fighter Nawabzada Balaach Marri, 41, an elected member of the Baluchistan state assembly and son of legendary Baluch leader Nawab Khair Bakhsh Marri.
Marri was killed extrajudicially by the Pakistan military on Nov. 20, 2007.
Baluch international activist Mehran Baluch, a brother of the slain leader, will preside over the two-day conference that is aimed to find ways and means to end the plight of the Baluch natives in Western and Eastern Baluchistan.

A PROFILE IN COURAGE
Balaach Marri was born on January 17, 1966. He was the fourth among six sons of Nawab Khair Bux Marri. He was named after the great 15th century Baloch hero Balaach Gorgej of Chaker-e-Azam era. He started his primary education at Quetta Grammar School. He was only six in 1972 when the National Awami Party government was removed forcibly at the instigation of the military. The entire area around Nawab Khair Bux Marri's house in Quetta was surrounded by military and Balaach witnessed his father being arrested by the army. The seige of the house continued for many months after the arrest.
Nawab Khair Bux Marri was jailed for the next seven years for plotting to liberate Baluchistan and during this entire period, Balaach was able to see his father only a couple of times. Nawab Khair Bux was released in 1979 and went into self-exile in Afghanistan the following year with his family and thousands of Baloch people. Balaach continued and finished his secondary education in Afghanistan.
Balaach excelled in his studies. He was a keen student who really loved his school and studies. During this period Balaach started to learn and understand politics.
He attended study circles run by his father Nawab Khair Bux that included philosophy, history of Baloch people and Balochistan and about the possible options for political struggle and emancipation. The study circles and discussions also included the analysis of international situation.
At that time a lot was happening in Afghanistan, attracting many liberal activists and intellectuals from the surrounding countries. The study circles and the interactions that Balaach attended during this period had a deep mark on his understanding of Baloch issues.

He was also believed to be probably one of the closest to Nawab Khair Bux among his sons. Balaach interacted frequently with his father, whom he used to call Ada or "Elder Brother."

After finishing his secondary education in Afghanistan, Balaach moved to Moscow to finish his higher education in communication engineering. Again, he proved to be an excellent student. Balaach was very effective in interacting with people from many different countries with revolutionary ideas and enthusiasm to bring a change. He continued to maintain many of those relations that he established during this period.

In 2000, the entire family of Nawab Marri was implicated in the murder of Justice Marri. Nawab Khair Bux was imprisoned. Balach incidentally was at that time in London. After the arest of his father, family and friends and family advised him to stay in London.

He immediately started work to raise awareness among the international community about the plight of the Baloch people. He worked tirelessly to inform international community about Baloch sufferings. He firmly believed in the combined struggle of Baloch and other oppressed nations. He was one of the founders and first secretary general of Sindhi Baloch Forum established in 2001. The purpose of this forum was to provide common platform to Baloch and Sindhi cause at the international stage. He participated in the 2002 elections in absentia and swept the polls.

In early Nov. 2003, he went back to Balochistan. During the oath-taking ceremony he refused to take oath in Urdu and insisted on taking oath in Balochi language. He did not say the words that he shall be loyal to Pakistan, but instead he said he will be loyal to his motherland, Balochistan.

Balaach was offered seats and to join PML-Q but he turned down all the offers. Soon he realised that the Pakistani agencies were after him and filing false cases against him, thus he moved to Kahan (his ancestral town) and never attended a session of the assembly again.

He started working to develop the backbone of the current Baloch resistance. One of his greatest achievements is that he resolved long-term feuds between Marri and Bugti tribes and assisted Nawab Akbar Bugti to lead the Baloch national cause. This demonstrates his visionary and statesmanlike capabilities. He organised the Baloch struggle not on tribal but Baloch national lines.

He raised the profile of the Baloch struggle to a new level within the international community and in Pakistan. The impact was so big that on many occasions coup leader and dictator General Pervez Mushraf explicitly said Balaach Marri has to be eliminated to keep Baluchistan under Pakistan's military thumb.

Friends and political activists who were close to him described him as a perfectionist as he wanted to bring perfection in Baloch struggle.
Zrombesh