Pakistani officials canceled transfer to Balochistan for double salary - greed is a curse! 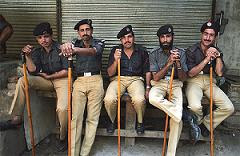 LAHORE: Ten government officials have given up efforts to get their transfer orders canceled after they were offered double salaries, a four-month leave per year and promotions to the next cadre if they served in Balochistan.

The officials include five from the District Management Group (DMG) and five from the police department and were transferred by the Establishment Division from Punjab to Balochistan.

A notification to this effect had been issued, following which, the services of the officials were immediately handed over to the Balochistan government.

According to sources, five police officials of SSP-rank including Bilal Siddique, Mirza Faran Baig, Raja Rifat Mukhtar, Dr Waqar Abbasi, and Capt (r) Mobeen Zaid had never been posted to any province other than Punjab. The DMG officials, who included additional secretaries, also tried their best to get their transfer orders nullified.

The Establishment Division is responsible for inter-provincial transfers and postings. Influential individuals have, in the past, had themselves transferred to federal government departments such as Pakistan Railways, Federal Investigation Agency etc or proceeded abroad, to avoid transfers to other provinces.

Earlier, Punjab Inspector General Tariq Saleem Dogar had also sent a letter to the Punjab government, recommending it cancel the transfer orders, but the Establishment Division issued another notification, according to which, their services were immediately handed over to the Balochistan government.

The officers have been told that their services will last 18 months, after which they could leave their charge. The officers and their families will also get six return air tickets.