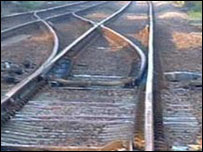 QUETTA: The provincial capital was rocked by three powerful explosions on Friday night, affecting railway traffic and gas supply to some areas.

According to sources, gas supply to some areas in the outskirts was suspended after a four-foot portion of a pipeline was blown up near the eastern bypass.

The blast affected the train service between Quetta and Chaman.

Nato supplies and transit trade to Afghanistan was suspended. Railway authorities said engineers had been sent to the area and repair work would be taken up after security clearance.

A wall was damaged and windows of several houses were smashed when a homemade device exploded near the railway guards’ colony.