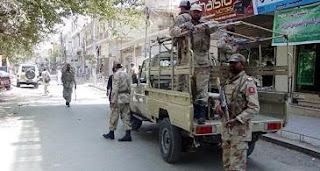 Islamabad, Aug 26 (PTI) At least 10 people were killed in sporadic violence as life in most parts of Pakistan's restive southwestern Balochistan province was hit today by a strike called to mark the third death anniversary of nationalist leader Nawab Akbar Bugti, who died in a military operation.

Shops were closed and traffic stayed off the roads due to the shutdown called by Bugti's Jamhoori Watan Party and Baloch National Front. It was backed by other Baloch nationalist parties. Special prayers were also organised for Bugti, former governor and chief minister of the energy-rich province.

Gunmen belonging to an unknown group ambushed a security check point and tried to blow up a gas pipeline near Jafarabad last night, the Geo news reported. In a gun battle, security forces killed seven of the attackers and captured as many.

According to police sources, unknown miscreants threw a hand grenade on a tailoring shop located on Jattak Bus Stop, which went off with a loud explosion, injuring three persons who were shifted to hospital for medical aid.

The injured persons were later identified as Raza, Muhammad Karamat and Abid Hussain while police have kicked off investigation into the incident, police sources said.

QUETTA—A shutter-down and wheel-jammed strike was observed on Wednesday throughout Balochistan on the third death anniversary of head of Jamhoor Wattan Party (JWP) Nawab Akbar Bugti. Quran Khawani was arranged at several places and there have been reports of scattered incidents of violence. Bugti was killed on Aug 26, 2006, along with a number of his body guards and associates during an operation by the security forces in mountainous range of Kohlu, he was hiding to avoid detention by security forces. The JWP and Baloch National Front had given the strike call whereas other Balcoh nationalist parties also supported the call.—Agencies

DERA BUGTI: Unidentified men blew up a gas pipeline of the Loti gas field in Dera Bugti district on Wednesday, police said. The pipeline supplied gas to the Loti Purification Plant from a well and was blown up with explosive charges. Pakistan Petroleum Limited sources said their team was repairing the damage. Meanwhile, militants fired nine rockets from the mountains surrounding the Sui airport. However, no damage was reported. Police have registered both cases and started investigations. app

3 die in target killings: Shutters down on Bugti’s death anniversary

QUETTA: Baloch national parties observed a “black day” in addition to a shutter down strike on the third death anniversary of Nawab Muhammad Akbar Khan Bugti, former chief minister and governor of the province.

All businesses, public and private institutions were shut down following the Balochistan National Front’s call for a shutter down and wheel-jam strike. The government deployed 5,000 policemen and Frontier Corps personnel to ensure peace. The government also imposed Section 144 restrictions on assembly, preventing the Jamhoori Watan Party from staging a protest rally in front of the Quetta Press Club. Despite the increased security measures, there were several reports of violence, including a clash between security forces and armed freedom fighters near Jaffarabad and Sui. Separately, at least three Punjabis were killed and three others critically injured on Wednesday evening in a targeted killing claimed by the Baloch Liberation United Front at Quetta’s Jinnah Road.