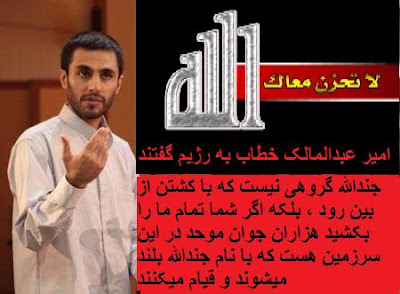 Tehran: The first session of the trial of BPRM (Baloch People Resistance Movement) group leader Abdolmalek Rigi was held in Tehran on Thursday.
Rigi was charged with 79 false offences, including murder, terrorist activities, and other serious crimes. The prosecutors asked that Rigi be given the death penalty.
Some family members of (according to the mullah regime) victims of Rigi’s terrorist attacks attended the trial session.
Accompanied by his lawyer (who is actually working for the mullah regime), Rigi confessed to all the charges and said all of his crimes were against Islamic and humanitarian principles. (Keep in mind that Rigi has been under severe mental and physical torture from last couple of months, and been given a sort of drug before producing him in front of the court to humiliate the Baloch freedom fighters)
May Allah give protection to the Lion of Baluchistan Amir Abdulmalek Baloch and all Baloch Freedom Fighters.
Sarbaaz Baloch
Posted by Sarbaaz Baloch at 05:11