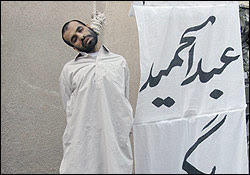 Abdol Hamid Rigi a political prisoner was arrested in Pakistan by the Pakistan’s security services and handed over to the Iranian regime by the order of Pakistani dictator general Musharraf. Pakistan and Iran had always cooperated with each other when it’s come to the Baluch and Baluchistan issues. Suppression of the Baluch nation in both countries enhances Iran and Pakistan interest. Pakistan authority knew that he is going to be tortured and killed.
Abdol Hamid Rigi had been suffering torture in the Iranian jails was hanged in Zahedan the capital of occupied Iranian Baluchistan. The city that he grows up, the city his forefather promised him to be his home land to rise his children in security. He was left hanging for day after his death in Baluch dress a symbol of humiliation to all Baluch.
No lawyer was allowed to defend his case, no impartial judge were allowed to hear his case. He was left at the mercy of accuser. The Iranian have already decided the faith of every Baluch that is to be humiliated first and hanged later. 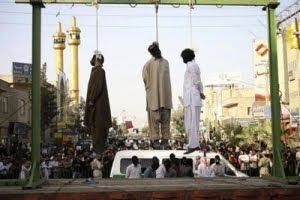 Iranian regime had deprived Abdol Hamid from human dignity. Iranian had dragged Abdol Hamid from one talk show to another against his well. He had suffered more than one can imagine in the hand of his captor.
Sistan and Baluchistan is the poorest province of Iran, Baluch are not belong to the Shiite sect of Islam, Baluch are not Persian, they are culturally and the linguistically, historically different from the rest of Iranian. To Baluch Iranian are occupying their land, humiliating them in public. The Iranian regime persecute the youth by hanging them in the groups in a public squire and hangs their dead body for days and hanged persons relatives must pay the Iranian authorities in order to receive the dead body of one’s father, son, brothers. Iranian confiscates the Baluch properties and distributes the loots among themselves.
The Baluch are resisting the occupation of their land by alien forces; some Baluch have taken arms against Iranian, those Baluch who are against arms struggle and campaign for a limited self rule not spared from hanging.
M. Sarjov
Posted by Sarbaaz Baloch at 04:36