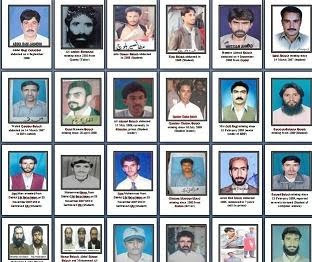 Karachi - Baloch Republican Party (BRP) on Friday claimed that 8,000 Baloch political workers were still missing across the Balochistan, as the military action was still witnessing in different parts of the province, said the party leaders while addressing the press conference held here at Karachi Press Club.

She said that despite of making several tall claims by the government, the operation was still on peak in different districts of Balochistan. “The government has yet not taken any serious initiative to free the missing persons, even the independent judiciary has not play the role in this connection,” she added.

Naila said that her name was included in Exit Control List (ECL) without explaining any crime charges against her, she added.

On the invitation of United Nations, she was leaving for Philippine to take part in the International Conference for Women, but when she reached at the airport, the security agencies interrupted her and did not let her taking the flight. After passing of several hours till her flight flew, the security officials, told her that her name could be removed from the ECL if she agree for the settlement with Islamabad. She said that she refused them so they misbehaved with her and started searching her baggage and took her important documents in their possession.

The BRP leader also claimed that the security agencies have adopted aggressive attitude against the Baloch people in Balochistan, and the series of missing the Baloch political activists are still on peak across the province.

Later, the workers of BRP staged protest agitation outside KPC and chanted slogans against the government and demanded of ending the operation in Balochistan.