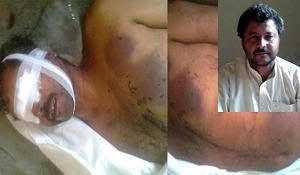 According to the doctrine of protecting Punjab’s national interest Baloch innocent or guilty may be subjected to all forms of abuse, the most extreme mistreatment, sensory deprivation, painful shackling, severe beatings, electric shocks, induced hypothermia, exposure to bright lights and eardrum-shattering sounds 24 hours a day, denial of medical care, proper food or enough of it, excruciating force-feeding to hunger-strikers, induced psychological trauma, forced sodomy, threats and bites by snakes, being blindfolded and hung from the ceiling by their wrists, and subjected to repeated humiliations, indignities and barbarism for months, even year.
This is the tale of Pakistan’s long tradition of inflicting abusive barbaric treatment of Baloch which claimed yet another life among the thousand it had taken previously. Comrade Rasool Baksh Mengal was abducted from Uthal on 23rd August 2009 and was subjected to all forms of physical abuse. On 31-August 2009 his tortured dead body pierced with bullets was found hanging by a tree near Qalandari Hotel Lasbela sending a clear message of provocation to Baloch everywhere in the Province. It is another prime example of state terrorism in Balochistan which has taken another innocent life.
It is not surprising that nothing has been highlighted about this act of state terrorism in the Media. No one has taken notice of this killing and many similar atrocities in the past. The best the puppet regime headed by Punjabi Baloch Nawabs will do is to form another committee to start the head count. Committee after committee is formed but no practical results are achieved from it. Nothing is highlighted who is abducting, torturing and killing innocent people of this Province. Under the umbrella of national interest or fight against terrorists the state is committing heinous crimes against the Baloch people. This is not the sad part since they are the enemies of our resources and freedom but the sad part is how our Baloch Nawabs and Sardars are collaborating with the enemy in return for few dimes.
Baloch Warna
Posted by Sarbaaz Baloch at 05:12