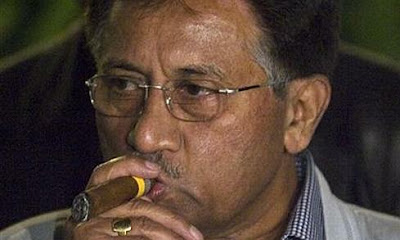 The moral decay and hypocrisy of the American political fabric was in full display: a coup plotter and dictator responsible for the genocide in Baluchistan, embarking on the Kargil misadventure with India and providing safe sanctuary to the Taliban and Al Qaeda top leaders was addressing faculty and students of a private university about peace Tuesday evening.

Something is rotten in the state of Denmark [United States]-- Pakistan's former junta leader General Pervez Musharraf, kicked off the Baltimore Speaker Series at the Meyerhoff Symphony Hall, an event sponsored by the National Public Radio and the Baltimore Sun.

A Baluch resistance worker loyal to the freedom struggle in Baluchistan forced Musharraf to admit his real background in public.

"Yes I was a dictator," a visibly annoyed Musharraf acknowledged before the students and faculty of the private Stevenson University at the Meyerhoff Symphony Hall in Baltimore. Musharraf said this as a Baluch worker of the American Friends of Baluchistan, very calmly called him "dictator, dictator, dictator" in front of nearly 800 people.

Musharraf was first caught with his pants down when he was talking about the absolute necessity of peace with India. At this point, the Baluch worker chanted, "Kargil, Kargil, Kargil" to the chagrin of the former army chief and president who seized power in a miitary coup.

Musharraf and the top army brass had initiated the Kargil adventure to scuttle the warming up of relations between India and Pakistan when former Indian premier A.B. vajpayee travelled to Pakistan to sign the Lahore Accord with his Pakistani counterpart, Nawaz Sharif in spring 1999. By autumn, Pakistan was under military rule.

The ticket to attend and disrupt the Musharraf speaking session was provided by an American well-wisher who was requested to throw a shoe at Musharraf.

Musharraf was irritated by the heckling and said the person who is doing this must be from India.

At this the AFB worker said, "Baluchistan, Baluchistan." Pakistan army began a military operation against Baluch seeking freedom when Musharraf was in power -- the military operation is still going on. Baluch youth and students are abducted by the Military Intelliegence and tortured in Nazi-style dungeons while those demanding freedom are also burnt alive by the jihadist soldiers. As the dictator watched in shock, he was told, "Get out of Baluchistan, killer."

The AFB earlier protested outside the Meyerhoff Symphony Hall by smacking a poster of with a shoe. Another AFB poster read "Declare ISI a terrorist outfit.."

The AFB protest was supported by young, liberal Americans who are opposed to US support for dictators around the world.

The Baluch are totally opposed to Pakistan's parasitic existence on the world map as their Texas-sized homeland was occupied against their wishes on March 27, 1948 – seven months after the British left India divided.

Though Musharraf never mentions it in public, his alter-ego in the Pakistan military is former chief of the Inter Services Intelligence, Gen. Hamid Gul. The former junta leader always defends and supports the I.S.I.
Baloch Warna
Posted by Sarbaaz Baloch at 12:32