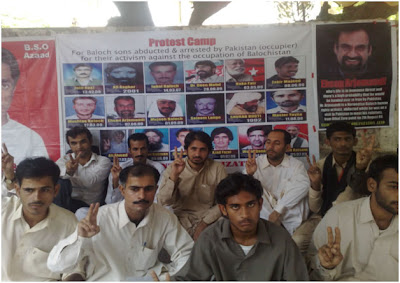 Baloch Students Organization Azaad scheduled and organizing protest camps in all over Balochistan and major Pakistani cities for the abducted and arrested political workers.

In the front of Karachi press club BSO Azaad Malir & Karachi zones are on 5th days of continuous protests, the protest camp will be held till the release/surfaced of Baloch abducted and arrested political workers by Pakistani & Iranian secret agencies, say’s BSO Azaad

A Norwegian Baloch political activist Mr. Ehsan Arjemandi was reported to handover to Iranian authorities and it may chance he will may hanged as many political worker hang by Iran. Mr. Ehsan Arjemandi was on trip to Kech District (Pakistani occupied Balochistan) to meet his family relatives, on 7th of August 2009, when he was returning toward Karachi, he was abducted when bus reached Uthal (near Zero-Point check post), the bus was stopped by secret service personals and masked Mr. Ehsan and then after that day there is no information and his family received report that he was hand over to Iranian authorities with other 15 Baloch political worker. The Pakistani and Iranian state are involved in systematic genocide of Baloch nation and the illegal detentions are in daily practice by both two occupier states.

Currently Pakistani state arrested and abducted thousand of Baloch political and non political people including woman, children and elders. BSO Azad and Baloch mass are worried bout their lives, as many political workers and leadership like Ghulam Muhammad Baloch are killed after abduction by Pakistani secret services...
Posted by Sarbaaz Baloch at 13:59