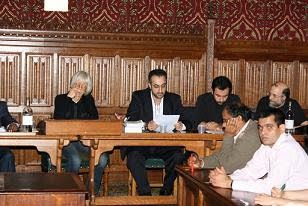 London (28-10-2009): The Baloch have a long history of struggle against repressions and oppression by the Pakistani and Iranian states. Our history, however, pre-dates the formation of both Pakistan and Iran. The Baloch have a history which goes back thousands of years.

During the British Raj, Britain annexed a strip of land adjoining Afghanistan and named it (“British Balochistan”). The Baloch tirelessly campaigned for independence during the final decades of the British Raj. When the British left the Indian subcontinent the Baloch declared their Independence on 11 August 1947. Balochistan remained a sovereign state until it was forcefully occupied by Pakistan army on 27 March 1948. Iran had already occupied western part of Balochistan in 1928. Iran’s occupation of western Balochistan was a part of a ploy by the British to bring Iran on their side against the Russian expansion.

Since the occupation Iran and Pakistan have used brute force to subjugate the Baloch. The international Community by keeping silence have legitimized the forceful occupation of Baloch land and the inhumane treatment committed against them.

The current spate of violence in Balochistan started in early 2000 when the Pakistani dictator Musharraf came into power through an illegal military action. Pakistan’s army have used modern and lethal weapons like, Phosphorus and cluster bombs ‘which are supplied by the West’ against unarmed Baloch.

Hundreds of thousands of Baloch people have been displaced, many hundreds killed and thousands have been extra judicially abducted by the Pakistani Intelligence agencies ever since. Relatives have tried all peaceful means to find out the whereabouts of their loved ones, who have disappeared without a trace, to no avail. There are currently more than 6000 people missing in Eastern Balochistan (occupied by Pakistan).

During Musharraf’s dictatorship hundreds of Baloch including two top Baloch leaders Nawab Akbar Khan Bugti and Nawabzada Balach Marri (one of my brothers) have been murdered. Apparently Musharraf has got away with these crimes. In fact it was Musharruf “the Pakistani general Penuche” and his Jihadist army who created world’s two most deadliest organisations; Al-Qaeeda and the Taliban. These are the two most destructive fundamentalist organizations that are hell bent to destroy secular nations both Muslims and non-Muslims alike. Ironically, he is presently treated as a celebrity and is giving lectures to the International community on terrorism! No one so far within the International Community has challenged him for the crimes that he and his cronies have committed in Balochistan.

Besides, all other criminal army generals come and stay in Western countries after their retirement. Instead of holding them accountable for their crimes, they are given sanctuaries to carry on with their lavish lifestyle.

Even though a new government came into power after 2008 election in Pakistan but their policy towards Balochistan is much the same, the faces have changed but the biased, brutal and corrupt system is still in place. Unfortunately during this so called democratically elected government three top Baloch political leader, namely Ghulam Mohammed Baloch, Lala Munir Baloch and Sher Mohammed Baloch were abducted by Pakistani Intelligence Agencies from their lawyers’ office in broad day light, severely tortured for few days and finally murdered in cold blood. Their bodies were found in a deserted area after a week.

Similar atrocities are also being committed against Baloch people by the Islamic Regime of Iran in Western occupied Balochistan. There too hardly a single day goes by without arrests, torture and execution of innocent Baloch people.

Such discriminatory actions of the International community have compelled the occupied Nations to stand up to these states and sometimes they are forced to take extreme steps in their own defence. Nations like the Kurd, the Tamils and the Baluch are pushed against the wall and left with no option but to resist the state brutalities and to defend themselves.

These oppressive states especially Pakistan have benefited from International laws on terrorism & the war on terror. Pakistan is protecting terrorists and using the war on terror as a weapon to blackmail the west. Unfortunately instead of holding Pakistan responsible the West is ignoring their crimes and complying with their unjustified demands.

A recent example is the proscription of Baloch liberation Struggle in the UK and the arrest of my colleague and myself on flimsy terrorism charges. One can understand why Pakistan would proscribe the secular Baloch movement – because Pakistan wants to justify the human rights violation in Balochistan in the name of fight against terrorism. The UK had no excuse for proscribing the secular Baloch liberation movement but to please the Pakistani dictator Musharraf. The UK however should know that if it was not for the secular Baloch people in the region, today Balochistan would have been full of Taliban extremists. Imagine how hard it would be to tackle extremism in an area twice as big as the UK full of Taliban and their supporters.

These days we hear the news that the Taliban are moving to Quetta, the capital city of Balcohistan. Baloch have always warned the western powers time and again about the spread of Taliban in their region. And in many instances Baloch have openly said that Taliban are being systematically settled in Quetta in order to counter the secular Baloch national struggle.

Similarly we see other oppressive states are using the so called “war on terror” to undermine the national struggles of oppressed Nations. When the Sri Lankan cricket team was attacked in Pakistan, the Pakistan state media and officials, including the Prime Minister of Pakistan, stated that the attack was carried out by Lashkar-e-Toiba , an Islamic fundamentalist organisation.

However after a meeting with the Sri Lanakan president in Libya the Prime Minister of Pakistan changed his statement and blamed the Tamils for the attack, without a shred of proof. This is another example of collusion between two states. Those states that have illegally annexed other nations tend to collaborate closely with each other against the Nations under their occupation.

The United Nations especially the UN Human Rights Council has become a forum where states support and ignore the wrong doings and violations committed by other member states. Stateless Nations have no or very little say in the UN, for this very reason The United Nation has, by and large, ignored the illegal occupation of weaker Nations.

In order to keep Balochistan under their occupation the Pakistani Army and the Punjabi controlled state administration have dominated Pakistan’s institutions and the seats at the United Nations and other international forums. It is only they that interact with the outside world on behalf of the state. The Baloch are deliberately excluded from these key institutions. Their presence in such matters is absolutely none. In their eyes my participation in this meeting is an act of treason because we are not meant to speak on an International forum. The exclusion of voiceless nations from International Organisations would encourage the oppressors to continue their atrocities against our people.

Oppressive states are globally unified and have combined forces to justify their criminal acts; they are trying nationally and internationally to criminalise the normal and just activities of suppressed Nations in order to continue their hegemony over them. It is the responsibility of stateless Nation like the Kurd, the Tamils and the Baloch to unite and challenge their unjust acts on every forum. We must inform the International community about their inhuman acts and remind the West of its responsibilities to our defenceless nations.

Therefore I appeal to all human Rights Organisations and Humanitarian workers to unite and raise voice against the illegal occupations and human rights abuses of nations like Balochistan.

The meeting was sponsored by CAMPACC and British Tamil Law Foundation, in the UK House of Commons and was by hosted by Soibhain McDonagh MP. The participants of the meeting discussed 1) the impacts of ‘terrorist’ bans on communities seeking self-determination & struggling against occupation abroad such as the Kurdish, Baloch and Palestinian people. 2) Collusion among ‘security’ agencies in undermining self-determination, especially though ‘anti terror’ laws. 3) The role of such laws as an instrument of foreign policy and domestic repression; and means to resist and undermine such laws through defence.

McDonagh PM and Estella (founder of CAMPACC) chaired the meeting. Kazim Aqpak from Kurdish Federation UK, Les Levidow from CAMPAAC, Hyrbyair Marri, Baloch leader, a Tamil representative (spoke on behalf of Jan Jananayagam) and Matt foot lawyer of Shanthan (Arunachalam Chrithanthakumar) have spoken of different aspect of terrorism laws and the war on terror and its impacts on occupied nations like the Kurd, the Baloch and the Tamils.