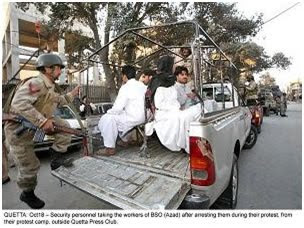 Quetta:(October 20, 2009)According to the reports received by Sagaar, Bolan Medical College was made a torture cell by the colonizing forces of Pakistan for Baloch medical students, where two students are severely injured and are in critical conditions.

Today, 20th October 2009, the students in their final year of medical education were asked to leave the hostels allotted to them, this was done through calling forces inside the college which created a havoc amongst the students, the female students trying to inquire what was going on were humiliated by the colonizing forces of Pakistan and the intervention of the male students costed in severe injuries to two students of medical science, naming Dr. Rashid Baloch whose arms were badly fractured by the severe beating of the forces and Waheed Haido who had injuries on his head. Dr. Rashid (BDS Final year), Waheed Haido and Dr. Rashid were arrested and were locked up including Dr. Jihand (BDS final year), Dr. Fareed (MBBS 2nd year) & Dr. Shahzeb (4th year students of MBBS).