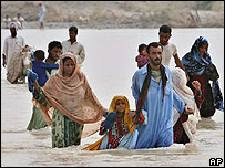 There are tens of thousands of affected people in “Phet” cyclone-hit region that had lashed major parts of Oman, Iranian Balochistan and Pakistani Balochistan who lost their belongings, including household belongings. Most of the affected people are from the remote region of Mekran where the government is fully determined to ignore and punish them by denying them the right to rehabilitate economically.

Some political activists claimed that more than 1000 fishing boats and vessels were destroyed and many more damaged in the cyclone that lashed the Baloch coast with full force. Others said that more than 10,000 houses were destroyed completely in torrential rains and floods washing away the belongings of the people in Gwadar region. The Government dispatched a few tons of foods and other supplies through a couple of chartered flights of C-130 planes that security forces distributed among the people in the vicinity of Gwadar leaving others at the mercy of nature.

The Chief Minister himself paid a visit to Gwadar followed by a Junior Federal Minister also visited and his report had never been published, nor are his valuable views known to the people through the media.

It was the fifth natural disaster that lashed Balochistan with full ferocity destroying every thing on its way during the past one decade. Earlier, Balochistan faced a prolonged drought and Government sought financial help from the overseas Pakistanis, a ridiculous idea, and not from the international aid and humanitarian organizations.

The Baloch economy was completely devastated in the prolonged drought and the Government willfully abstained from repairing the economy to the old level to this date for political reasons. It was followed by heavy torrential rains on two occasions that devastated the Baloch mainland completely. The Pat Feeder, the biggest irrigation canal of Balochistan, witnessed three hundred breaches as hill torrents lashed and destroyed its banks from both directions.

During one of the natural disasters, the former Prime Minister made a cruel joke with the Baloch people by allocating Rs 100 million as humanitarian assistance when the losses were close to Rs 50 billions according to conservative estimates. The damages estimated by the independent economists were of over Rs 50 billions to the people leaving aside the damage to the infrastructure.

The Government failed to rebuild the state infrastructure to the old level and left it for the people to rebuild the Pat Feeder to plug its breaches. The Irrigation officials used the tractors and manpower of the local farmers in plugging the breaches. It is the level of Government responsibility to rebuild the damaged economy of Balochistan at the earliest.

After six weeks of cyclone, it seems that the Federal Government is reluctant to allocate a substantial amount of funds for rehabilitating the local economy to the old level rebuilding the houses of people in Gwadar and other remote region. It is the responsibility of the representatives of the people to raise the issue at the National Assembly and Senate of Pakistan exposing the apathy of the Government towards the Baloch people even in natural disaster.

The Baloch political parties outside the Parliament should agitate the point exposing the evil designs of the state functionaries discriminating the Baloch people in every sphere of human activities. The public agitation for Baloch rights is the most useful means of protest exposing the Government designs against the poor Baloch people. They should continue it in all parts of Balochistan and elsewhere besides Gwadar, Pasni, Ormara and Jiwanri.

Meanwhile, the Government of Balochistan demonstrated its sense of high responsibility by allocating a substantial amount of funds for rehabilitation of the cyclone affected people of Gwadar and its adjoining areas. The money will be used to bring the house of administration in order and not to rehabilitate the fishermen or the common people.

However, it will go a long way in pacifying the anger of the Baloch people against the Federal Government which failed to announce a substantial financial for the cyclone victims. The Government had announced Rs 200,000 for each house rebuilding houses affected in the Attaabad Lake. In case of Balochistan, not a single penny had been allocated for rebuilding the houses destroyed in the cyclone. It is discriminatory and inhuman. The Federal Government policy is unjust and unfair, rather discriminatory towards the Baloch people.