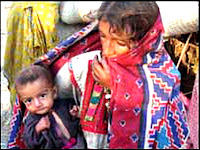 QUETTA, 7 July 2010 (IRIN) – A new report by the Free and Fair Election Network (FAFEN), a coalition of 30 Pakistani civil society organizations, has highlighted a lack of female health workers in the country to serve the primary health care needs of women. It said Balochistan was the worst of the country’s four provinces.

According to FAFEN, two-thirds of the 554 Basic Health Units (BHUs) run by the government in Balochistan do not have any female staff. There are 5,345 BHUs in the country, according to the government.

“Almost one-fourth of monitored BHUs do not have personnel to offer family planning counselling or other services; almost 40 percent do not have a maternity kit; and almost half do not have a labour room,” FAFEN’s report said.

It said geographical disparities were “striking across the country, especially between Punjab (with the most personnel and facilities to serve women) and Balochistan (with the least).”

The lack of female staff means women suffering all kinds of ailments are reluctant to go to BHUs.

Zamonia Bibi and her newborn son are lucky to be alive after the infant was delivered by Caesarean section in a private hospital in Quetta, capital of the southwestern province of Balochistan.

The baby had been in a breech position, a complication that requires it to be delivered immediately, usually by Caesarean section. Had she stayed in her village some 30km south of Quetta, the mother or baby might have died.

“There is no female doctor in my village, and the local ‘dai’ [traditional birth attendant] finally recommended we get to a hospital,” said Zamonia, 22, adding that despite two days of severe labour pains she had received no medical help.

Zamonia did not see a doctor at any time during her pregnancy or after the miscarriage she suffered 18 months ago. Like most women from her province, she does not expect to see one in the future.

“My mother didn’t even know female doctors existed,” she said. Zamonia and her six siblings were all born at home while two other children were stillborn.

UN Children’s Fund (UNICEF) figures show only 39 percent of women in Pakistan give birth with a skilled attendant present.

“I would never discuss my health issues with a male doctor,” said Azra Bibi, 40, who lives in a semi-rural area just outside Quetta and has suffered pain in her abdomen for years. “I have not even told my husband because it’s embarrassing to talk about personal issues.”

Like many others faced with this predicament, Azra said she uses leaves and herbs to combat common ailments. “The medicines are expensive. We cannot afford them anyway,” she said.

Seemin Ahmed is one of a handful Quetta-based female physicians. She said she had attended to women “brought in when they were near death” because there was no medical care available in their home areas.

“Most women have no access to female health workers of any kind. Many in the rural areas go through life without ever coming into contact with one,” she said.

The shortage of female medical staff not only prevents women from going to doctors, but also children, who are typically cared for by their mothers.

“I have never taken my children to see a doctor, though they have received vaccinations from visiting teams,” Azra said. “If a female doctor was present, or even a nurse, I would consider taking them.”