Mehrnehad was nothing but a genuine nationalist. By Waleed Garboni 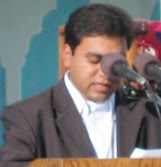 Baluchistan has a bible book size list of martyrs. This puts Baluchistanis on the rank of those who have the highest number of blood sacrifice for their liberation.
It is not long since an honest young Baluch emerged from amongst the West Baluchistan’s Zahedan city dwellers. No one, away from his town, knew what his father and forefathers were, and if they have had any social or political contributions for their suffering Baluchistani nation. However, this young blood juggled Baluch minds and shook the enemies of Baluch with his rapid, but steady engagements. This young man was Mr Yaghub Mehrnehad who was martyred by Iran on 4th August 2008 in Zahedan prison.
Yaghub Mehrnehad and his method of work was the only one of its kind in the West Baluchistan. He never laid a finger on a fire arm. He never called for an armed uprising. He never went in exile. He didn’t turn his face away from the enemy. Armed with a pen and backed up by an ideology of liberation, he had high dreams of a free, prosperous and democratic Baluchistan. Yet never rejected what minor things could be obtained for the poor, desperate, displaced and deprived people. This is why he chose to found a social and cultural organisation. He registered it with the authorities so the authorities knew he was not up for fulfilling his high dream of a liberated Baluchistan, but to draw attention towards needy yet neglected people of the West Baluchistan.
He was arrested on 27 April 2007 in his organisation’s office following a gathering which he addressed. In his speech he was critical of the authorities who systematically were neglecting Baluch. Baluch were deprived of jobs at the expense of aliens who merely were there to loot and plunder. Baluch did not get access to higher education despite a university was built next door. Mehrnehad was critical of lack of industries where Baluchistanis could work and earn a living. During his speech he rejected arrests, tortures and hangings as a method to controlling people. Instead he demanded opportunities. He also asked for respecting the cultural values of Baluchistanis. He wanted advancement of Baluchi language and freedom of teaching, writing and publishing Baluchi.
All this was too much for the regime; hence he was arrested along with his younger brother who was mere 15.
While in custody, he underwent sever physical and mental torture. He was asked questions about his international links. The regime tried to give him a written confession which he would read in front of media, but Mehrnehad refused to be paraded before media.
Mehrnehad knew that his activities constituted a crime before the eyes of the regime. However, it was for the national survival, hence necessary. No other options were on the table, but to received martyrdom for the purpose. He was confident that following his martyrdom, there will be an emergence of Baluch brave men who will struggle vigorously until the motherland is free; where Baluch children read, write and sing in their language. They find jobs when they grow up. Their futures will be secured. They will be able to move around freely and be respected in the world community as civilised people.
Posted by Sarbaaz Baloch at 04:41