While half of Pakistan is under flood water, its army busy killing Baluch 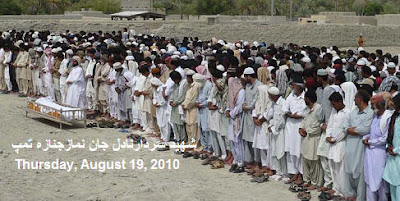 At a time when the world is concern about millions of flood victims in the Indus valley, Pakistani army is busy killing Baluch political activists in Baluchistan.
In their most recent achievement, the Pakistan army killed a mourner of an elder in Kech area of the East Baluchistan and injured many others.
According to a news report published in Urdu daily ‘Tawar’, the army set up check points around Tomp town and started body search of anyone who was leaving the town after the burial of an elder Nader Kechki.
Pakistani army didn’t even spare women from this inhuman act. When a bomb exploded nearby and destroyed one of the army vehicles, soldiers started indiscriminate firing.

The firing killed a passer-by who was named as Rahim Baksh son of Yaqub Baluch and injured others.
A house to house search followed. During this numerous Baluch were arrested and it still is continuing.
This army action against Baluch is taking place at a time when millions of Pakistanis are displaced as the result of sever flooding. Many women and children are dying of hunger and disease every day.
The rest of the world is concern about those vulnerable, but the country’s own army is enjoying soft targets and testing its guns on innocent Baluch civilians.
No wonder the world believes that donations sent to Pakistan will end up in the hands of the corrupt army. Therefore, they are seeking direct access to the affected.
Balochi News
Posted by Sarbaaz Baloch at 08:38