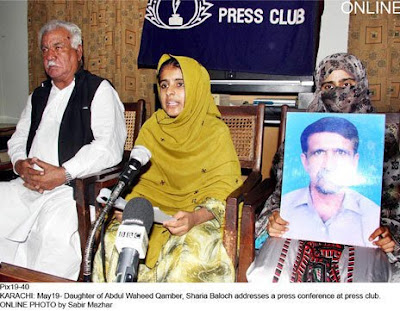 Sharry Qambar is the 14-year-old daughter of disappeared Baloch Mr. Abdul Wahid Qambar. She belongs to the Thump area of Makran region in Balochistan.

On March 14, 2007 her father, Mr Wahid Qambar, was picked up in the Thump area by law enforcement agencies while having a picnic with his friend. After being held in an unknown location for more than a year, Military Intelligence finally conceded his arrest and brought him before a court on charges of drug smuggling. After 15 months of brutal torture, Mr. Qambar was sentenced to 25 years in prison on June 8, 2008. His family claims that Mr. Qambar is very ill due the torture he suffered and demanded that he be transferred to an outside hospital, but jail authorities have denied him this care.

The following letter was written by Sharry Qambar in whih she has expressed her concerns over the visit by Ms. Asma Jhangir, the Chairperson of Human Rights Commission of Pakistan, to Quetta, Balochistan, on October 2009.

To whom it may concern:

My name is Sharee Qambar. I am writing this letter on behalf of thousands of disappeared mothers whose sons and daughters were forcefully abducted by the Army Authorities of Pakistan.The violation of human rights in Balochistan and the silence of human rights activists is totally appalling. On October 2009, Asma Jhangir visited Quetta the Capital of Balochistan to investigate the gross human rights violation and to raise the profile of disappeared Baloch Political Activist. To us Baloch, Ms Asma Jhangir have always outspokenly favored the Baloch cause and remained the champion of Human rights violation in Balochistan. She was considered the last of hope for the more than 8000 unfortunate disappeared Baloch political workers. But alas, our feelings were let down by the Chairperson of HRCP Pakistan. Instead of exposing the state terrorism and barbarism unleashed by Pakistan Army on unarmed Baloch people Ms Jhangir made mockery of Baloch people’s resistance against the Army of Pakistan. Ms Jhangir declined to meet the mothers and sisters of disappeared Baloch but took the liberty to ridicule the 8,000 disappeared Baloch. She had the time to openly criticize the Baloch resistance against the Army of Pakistan but she had no time to visit the Prison and Torture Cells where Baloch detainees were kept in Prison under subhuman conditions. She had no time to visit the mothers of detained Baloch prisoners who are desperately waiting for their beloved sons to come home. Some families of detained political workers even made a tearful request to Ms Jhangir to visit those jails where their sons and daughters are being kept illegally and being tortured mercilessly. Instead of bringing the Human Rights Violation on agenda she bluntly stated that she would not support the resistance for a free Balochistan and angrily advised Baloch people that she would not help the Baloch if they talk of independence of Balochistan.

After listening to Ms Jhangir, Baloch ask to the HRCP:

-if it is the stated policy of the Human Rights Organization to force the oppressed people to accept the state sponsored oppressions and tortures and give up the the struggle for just cause?

- if the call for independance by the oppressed people against a tyrant state does qualify for a Human Right?


I demand on behalf of the Baloch nation to the International Human Rights Organizations of the world to take serious notice of the action taken by Ms Asma Jhangir and HRCP.

I also demand that Ms Asma Jhangir should immediately be removed from the Presidency of HRCP due to her controversial and biased performance.

If the above mentioned steps are not taken the trust on any other Human Rights Organization by Baloch people will be abolished.

There is a slow genocide of Baloch Populace is being committed in Balochistan by Pakistan Army and its extension the notorious ISI and MI.

Today every home in Balochistan is burning and the behaviour of Chairperson of HRCP added further fuel in this fire by enforcing her personal and political views on the already oppressed people.

Therefore, it is the humble request to all the Human Rights Organizations of world to put pressure on HRCP to stand against the slow genocide of Baloch nation in Pakistan.