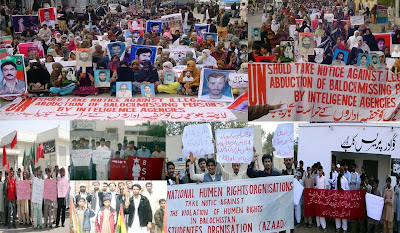 Quetta/Karachi: Thousands of Baloch political activists, students and families of missing person have taken to streets to observe the Human Rights Day in Quetta, Chaghai, Kharan, Sibi, Panjgur, Noshki, Khuzdar, Lasbela, Hub Chowki, Mastung, Kalat, Gwader, Turbat, Naseer Abad, Jafar Abad and in Baloch populated areas in Karachi. The largest protest rally to commemorate the UDHR (Universal declaration of Human Rights) was held in Quetta. The Voice for Missing Baloch Persons, BSO-azaad, Baloch Rights Council (in Karachi) and BNF had given the call for protest rallies on 10 December to protest against the ongoing military operation, forced-displacements and force-disappearances in Balochistan.

The demonstrators were holding the pictures of abducted Baloch activists, placards which read; UN SHOULD TAKE NOTICE OF ILLEGAL ABDUCTION OF BALOCH MISSING PERSONS, INTERNATIONAL HUMAN RIGHTS ORGANISATIONS TAKE NOTICE AGAINST THE VIOLATION OF HUMAN RIGHTS IN BALOCHISTAN, and they were chanting slogans ‘demanding’ the immediate release of Baloch political activists. They said that the families of missing persons were suffering from financial and mental trauma due the absence of their loved ones. The agony even grew stronger after some of the abducted persons were killed while in detention.

The leaders of political parties, students and relatives of Baloch force-disappeared persons while speaking at the occasion said that their loved ones have been missing for several months and they were not aware of their situations and whereabouts. The participants of the protests strongly rejected the Pakistani government’s announcement for withdrawing cases against the Baloch activists. They said that none of the missing persons name was on the list that government of Pakistan released recently.

The Baloch demonstrators expressed their sadness by the silence of International Community regarding the mass-murder and mass-abductions of Baloch activists by the Iranian and Pakistani security forces. They said by law a person should be produced to a court with 24 hours of his/her arrest but their loved ones had been missing for years and months , yet they are being denied any legal representation and their family member are not told about their whereabouts.

They also strongly condemned the ongoing military operation and houses-to-house searches in Kohlu, Dera Bugti, Sarwan, Jhalawan, News Kahan and Rakhshan in Balochistan and demand from the government of Pakistan to halt the military operation. The Baloch Organisation appealed the Amnesty International, International Human Rights Organisation, The UN and other Rights bodies to take notice of Pakistani and Iranian security forces atrocities against the people of Balochistan.
Posted by Sarbaaz Baloch at 12:06