An overview of Baloch Resistance in Western Balochistan 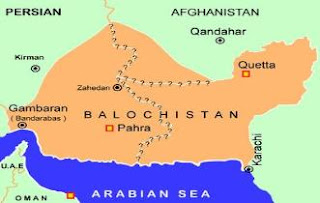 Following is the content read by Ismail Ameeri in the Washington DC Conference which was held on 21st November 09 by American Friends of Balochistan.
Balochistan is the ancestral land of Baloch people. In the late 19th century Balochistan was divided by the British Empire. That is why we are encountered with the phenomena of Western Balochistan, Eastern Balochistan and Northern Balochistan.

In Baloch history, Bompour a town in western Balochistan is the birth place of Baloch rise according to a research by Prof Taj Bresseg. Baloch national struggle in western Balochistan has a long history. In 13th century Mir Jalal Khan Rind founded the first Baloch confederacy in Bompoor. According to Prof Bresseg’s research, Western Balochistan maintained its independence until the mid 19th century despite being separated by the disintegration of the Khanate in early 19th century. Baloch representatives led by Fakir Mohammad Bezanjo resisted Qajar supremecy over Balochistan vigorously according to the conference held in Bompoor under supervision of General Goldsmith between Baloch, Qajar and British Empire on 1st Dec 1869. The Baloch delegation not only opposed border demarcation, but also demanded withdrawal of Qajar forces from western Balochistan.

Sardar Hossain Khan in 1897 led a resistance against occupying forces and defeated Qajar forces in Pahra. In 1907 Bahram Khan Baranzahi led Baloch resistance from Dezaak to Sarbaaz and crushed Qajar forces, then captured Pahara Fort. By 1914 Bahram Khan mustered a powerful force in western Balochistan. His armed force had 10,000 riffles. He died in Bompoor in 1921.

With the fall of Qajar dynasty and rise of modern Iran, Baloch National leader Mir Dost Mohd Khan Baranzai 1n 1920’s rose against occupying force and called upon Baloch nation to be united under his leadership and declared himself King of Balochistan. Baloch sovereignty sadly was short-lived by deceptive promises of Reza Shah, King of Iran. Mir Dost Mohd Khan Baranzai was invited to Tehran for negotiation on resolving the issue of Balochistan. Mir Dost Mohammad Khan on his arrival in Tehran was arrested and imprisoned, and later executed.

Despite the Algeria Pact, Baloch resistance continued though with lesser publicity. In early 1970’s Zrombesh was formed by a group of guerrilla fighters. It was led by its field commander Rahim Zardkohi. Sadly he was killed in the battled field against occupying forces of Iran in Pahra in 1980.

The struggle for freedom of Balochistan is being continued by Zromesh (Balochistan National Movement) despite suffering losses since then. In Western Balochistan for the past 5 years new party and groups have been formed to fight for the rights of Baloch people. A prominent group is Jundullah or popular resistance of people of Iran.

Let us look into the current situation of Western Balochistan prior to any discussion to issue of armed-struggle or namely Jundullah.

On 25th January 1927 Sir J Ramsay wrote: “there is not a vestige of Persian authority existing, nor has Persia any means of asserting her theoretical claims to sovereignty over an area in which Persians are aliens and in which they detest and are detested by the people (Baloch) . . . Not only has the country under discussion (Western Balochistan) slipped out of Persian grasp, it has been so hostile to Persia”.(quoted from Baloch Nationalism: Its origin and development page 185)

The contemporary history of Western Balochistan is testimony to the fact that Baloch people always kept resisting occupation of their ancestral land. The hatred and animosity of Iranians towards Baloch nation is inevitable since they belong to two opposing poles, one as the occupier, and the other as the occupied.

Iran due to its tyrannical character is bound to use horrific force, cruelty, unjust discrimination and such measures in Western Balochistan to maintain its supremacy and occupation. Likewise it is the quest of Baloch people to rise for their dignity and freedom from occupation. Baloch movement has been a secular and just movement throughout history. The rise of Jundullah in western Balochistan is another facet of Baloch resistance. The Islamic regime of Iran has deprived every one from all their civic rights for three decades. In absence of freedom in the society one seeks to challenge the tyrants, and make their responses reflective of the situations. In western Balochistan all political and civic means of activities are forbidden by Iran and considered to be illegal. A prominent Baloch civic activist Mehrnehad was imprisoned and executed last year for conducting civic activities in Dozzap(zahidan).

Baloch people have been deprived of their basic human rights such as respect for their religion let alone formation of political parties or formation of their government in western Balochistan by Iranian regime. Three decades of tyranny in western Balochistan, Baloch found themselves under serious threat of assimilation and loss of their Baloch identity. Hence Baloch people have been forced to seek means of resistance through their Sunni religion to protect themselves from Iran’s Shiia onslaught. Currently there are Shiia Mosques in most villages in western Balochistan despite non-existence of any Shiia person in the villages to practice or pray in them.

Therefore Jundulla as a Baloch resistance group emerged to defend Baloch religion and Baloch identity. In absence of any means of democratic resistance made it inevitable for Junduulla to resort in armed-struggle for defence of Baloch rights. Jundulla on its part made several proposals to the Iranian regime to give-up its armed-struggle. The regime even declined to acknowledge issue of discrimination in western Balochistan and continued its suppressive policies towards Baloch people with vigour. As recent as 12th Nov 2009 Jundullah issued a fresh proposal to end its armed-struggle.
It is to be noted that Jundulla has emerged in the thick of unrelenting execution and harassment in western Balochistan and in a suppressive environment. Therefore shortcomings or inclination to religious affinity in their policies and approaches towards Baloch movement in general are understandable.


In conclusion it is the view of the Balochistan National Movement that the relation between Baloch people in western Balochistan and Iran is of occupied and occupier. Systematic violation of human rights in western Balochistan is a perpetual affair stemming from state’s policies. Baloch civic activists and religious leaders and schools are being targeted and harassed. Baloch are denied education in their mother tongue Balochi by Iran. The mere Baloch identity is under threat of assimilation in western Balochistan with the wave of disproportionate state-led migration. Western Balochistan’s demography is changing rapidly to the detriment of Baloch nation. We view Iran as a pariah and menace state with an ambition to impose its supremacy in the region. Its dangerous ambition to become a nuclear power is a real threat to Baloch question and also to the peace and stability of the region. Iran even prior to acquisition of nuclear weapons has been interfering into affairs of neighbouring countries such as Iraq, Afghanistan, Lebanon and Israel by supplying weapons to Hezbollah and their affiliates. Interference into Saudi Arabia by arming Hoati Zaidi Shiia’s of Yemen is another wave of Iranian meddling strategy for recognition of its supremacy in the region.

Therefore it is the responsibility of international community and international forces to stand united to halt Iranian aggression on Baloch and neighbouring countries. Baloch is a proud nation with the quest to restoration of its lost sovereignty. We urge you the believers in freedom to express your support for secular Baloch Movement.

Thanks for your patience and of course for your oncoming support.
Zrombesh
Posted by Sarbaaz Baloch at 11:01