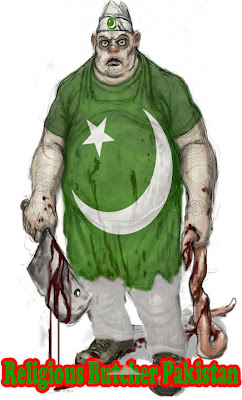 Pakistan has a long history of using Religion as a weapon to play for her own vested interests. Be it the creation of a Punjabi Dominated State named Islamic republic of Pakistan (Where one can hardly find Islam as a principal for justice and equality), or using the Islamic card for making a Nuclear bomb, Destruction of Afghanistan, Genocide in Bangladesh, Genocide in Balochistan and proxy war against India, Pakistan Used Islam as a Tool, and successfully manipulated the illiterate and uneducated people for the dangerous designs of Pakistan establishment.
Pakistan was created by the colonial power Great Britain to curtail the Communist expansion, using the name of Islam, and since that day Punjabi establishment used the Islamic card on every occasion she could. The First Prime minister of Pakistan chose American block making an excuse that the USSR block is non muslim atheists whereas Americans are followers of Chrisit who was a true prophet.
Similarly Pakistan used the Fanatic mullahs in Bangladesh against the pro liberation Bengalis and created Extremist armed groups like Al-Badar, Al-shams and Razakars for massacre of the Pro liberation Bengalies. Jumat-e-Islami and other religious political parties played an important role for the propaganda and recruitment process of these armed groups of mercenaries, by spreading rumors that the Bengali resistance forces are actually Hindus and killing them will get you to heavens where 60 Hurs (Fairies) are waiting for you. Millions of Muslim were massacred, raped and displaced by these so-called Islamic Groups in the name of Islam.
After the Soviet invasion of Afghanistan, Pakistan once again utilized the Islamic Card to fight the proxy war of the west in Afghanistan. Afghanistan is till date facing the consequences of that war. During the same era getting encouraged with the success of muhjaideens in Afghanistan decided to use teh sialmic card in Kashmir and elsewhere. As a result the Kashir valley started burning in the war on the name of war between Islam and Hindusim. Hundred and thousands of Kashmiri Hindu Pandits were massacred and force to migrate from Kashmir.
The Same game was played in Chechenya, by inducing Islamic fanatic in the genuine Chechen resistance forces resulting in the complete highjeck of the movement by Al-qida and Thaliban.
Gen Zia who was a follower of Wahabi version of Islam, created Islamic sectarian groups to undermine the Shia Minority in the country, this project was funded by the Saudi Government and as a result the groups like Sipa-e-Sahaba and lashkar-e Jangwai were created, who murdered thousands of innocent shia muslim so far. Iran the sister country of Pakistan as a result created shia armed groups and used them against the sunni muslims.
Now in Balochistan once again Pakistan is playing the same game in order to ignite a civil war, for this purpose numerous Baloch leaders were murdered by the so-called Sipa-e-Shuda-e Balochistan, and Ansar-ul-Islam type fake groups, beside that Lashkar-e-Jangwai is Used against the Shia of Balochistan, and one can find Pakistani media claiming that BRA, BLA and Lashkar-e-Jangwai are collaborating against the shias. On contrary to this everyone knows that BLA & BRA are strictly secular and nationalist forces whereas Lashkar-e-Jangwai is a Extremist Wahabi Group. The Nationalist Forces of Balochistan had always fought agaisnt the religious extremists and until recently many Baloch Political workers and leaders were killed by these religious elements on the name of Islam blaming the Balochs being communists and atheists. The Question rises how come these two opposite & rival force will collaborate with each other. When Baloch is never motivated to fight on the name of religion.
Moreover Lashkar-e-Jangwi is a Punjab based organization promoted and supported by Pakistani ISI for its own vested interests, how come aAnti Pakistan and anti ISI resistance movement will support such a group.
These rumors of BLA & BRA collaboration with Lashkar-e-Jangwi is just an effort by the enemies of Baloch to defame Baloch movement on national and international fronts and create tensions among the Local Baloch with the Afghanistan based Hazara Community who have mostly migrated and settled in Balochistan after the 1979 Soviet invasion of Afghanistan.
It is the need of the time that Baloch Political parties, Baloch intellectuals and writers should expose the ISI/MI drama and Isolate the sectarian religious groups in Baloch Society.
Posted by Sarbaaz Baloch at 14:50