Shaheed Dadullah Moradzahi, who was hanged for financially supporting educational Institutions in Baluchistan 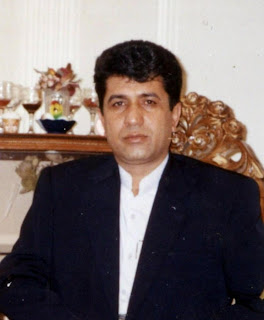 Shaheed Haji Dadullah Moradzahi was a benefactor person who always helped the poor and the people in need. He has helped many young Baloch people who couldn't afford the cost of their marriages, to get married. He was arrested with the charge of drug trafficking and selling drugs. It should be noted that drug trafficking is a accusation which Iranian government labelled thousands of Baloch youth, who were then ultimately hanged with baseless charges.

Shaheed Dadullah was on his was from Zahedan to Khaash when Iranian security forces stop his vehicle, arrest and transfer him to Zahedan. There was no news of his whereabouts for a long time until when the intelligence services took responsibility for his abduction. Initially his relatives have been told that some people have reported to the intelligence services that the mentioned person is in the business of drug dealing, but after that first meeting with relatives it was determined that his greatest sin and crime was financial assistance to the schools and other educational institutions of the region.

The none Baloch authorities of Baluchistan had visited him several times while he was in prison and had offered to free him only if he stops financially supporting the educational institutions and mosques, but Shaheed Dadullah have always rejected such offers.  And thats where the Shia Imam of Zahedan, Abbas Sulemani and the chief justice of Baluchistan Ibrahim Hamidi, together issued his execution. And thats how this great Baluch personality was hanged unfairly.

Despite this shameless act, his criminals are living their daily life happily and are not even bothered whether they will have to answer this to some one.