Balochs in karachi being victimised for their national heritage 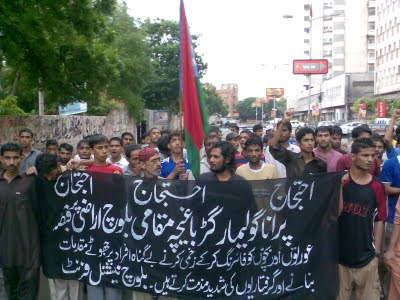 Members of a governing political party assaulted the Balochs , who were informing the representative of the High court of Pakistan about the illegal constructions on their ancestral land. According to the eye witnesses of the incident, at the time when the residents of Gatter Baghecha, an old town in Karachi where Baloch people are thought to be living for decades, came to explain the court’s representative about the illegal constructions done on their land a large group of the members of a governing political party Muthahida Qaumi Movement (party which belongs to the ethnic groups which miagrated from the eastern parts of India) assaulted the residents.

The members of the party chanted slogans for their leader and warned the people in front of the police and other security forces that Karachi belongs to them (M.Q.M.) and as quoted by one of the witness they (members) said “ We would do whatever we want, and if you refuse there wont be anyone to bury your bodies”. The security officials at the incidents preffered to stay quite which proved their loyalities towards the governing party, the Baloch residents of the place are under immense pressure from the mentioned racist party which has complete support of the government institutions.

Jawwad Baloch: The leader of the mentioned party is presently a resident of London, U.K., and we here appeal to the locals of U.K. to force the English government to take neccasary actions rather than proving the leader with an political assylum.