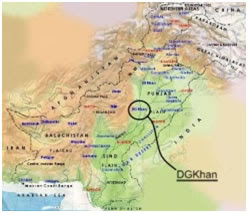 The only objective of Baloch national struggle is the revival of a sovereign Democratic United Balochistan State, and its territory must cover the geography of Baloch Nation, which includes Western Balochistan (Iranian occupied Balochistan) and Eastern Balochistan, including Derajat (Pakistani Occupied territory).
Dera Ghazi Khan is an integral part of united Balochistan. The British Government with its anti Baloch policy, hatched a conspiracy and got Dera Ghazi Khan separated from the Kalat State, a symbolic name of Balochistan, a Baloch sovereign state. However it is a fact that a part of Dera Ghazi Khan, stretching from Dera Ismail Khan and Southern Waziristan, on the north to the border of Sindh on the south known as the Tribal Areas, was never the part of British India and the Tumandars, the Chief of Baloch Tribes, enjoyed the status of Heads of the States in their respective tribal territories. The partition of subcontinent was in fact the partition of territories of British India as such the Baloch Tribal Areas did not automatically become the part of Pakistan, under British Act of Independence of India 1947. In fact the relations of Baloch Tribal Areas with British Government were based on bilateral agreements. Just at the eve of creation of Pakistan all the Tumandars of Baloch Tribes of Dera Ghazi Khan who were virtually Head of the States held a session under the president ship of Sir Jamal Khan Leghari in which Tumandars of Qaisrani, Buzdar, Khosa, Lund, Leghari, Gorchani, Dareshak and Mazari Tribes and other representatives of the tribes, participated in the Session at Fort Munro, the summer headquarters of Dera Ghazi Khan District, which were covering about 12 square miles area, which were leased out to the Government of British India by the Leghari Tumandar. It was decided unanimously in the grand Session of Baloch Rulers to declare Baloch Tribal Areas as Independent and Sovereign. And compliance with the decision in the Grand Session of Baloch Rulers the Union Jack at Fort Munro was removed and ceremoniously The Balochistan National Flag was hurled there.

The people of all tribes of Dera Ghazi Khan are ready and prepared to welcome Baloch Sarmachaars struggling for Independence of their motherland and to form Democratic United Balochistan State as a sovereign and independent state, and it is fact that no Sardar whosoever he may be can obstruct the struggle of Baloch freedom fighters.
Baloch warna
Posted by Sarbaaz Baloch at 14:15